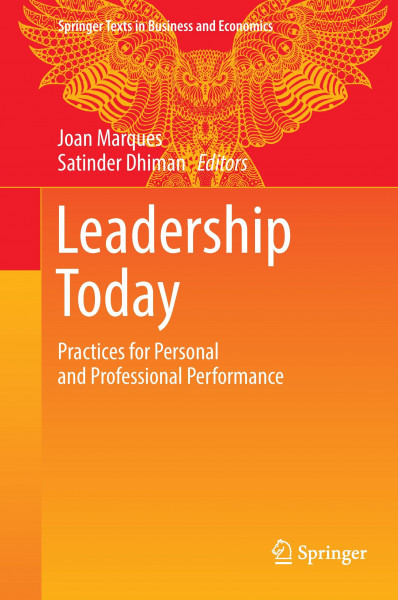 This textbook provides a clear understanding of leadership needs in today's business world, explained within the scope of hard and soft leadership skills. It captures qualities and skills such as spirituality, empathy, moral behavior, mindfulness, empathy, problem solving, self-confidence, ambition, knowledge, global understanding, and information technology. This text explains and provides guidelines for the implementation of each skill and includes examples from contemporary and historical leaders inviting the reader to consider each quality and engage in self-reflection. This book deviates from excessive theoretical descriptions presenting a timely, hands-on approach to leadership. Featuring contributions form academics and professionals from around the world, this text will be of interest to students, researchers, professionals in business and leadership who aspire to lead beyond their immediate environment. von Dhiman, Satinder und Marques, Joa

Joan Marques, PhD, EdD, serves as Assistant Dean of Woodbury University's School of Business, Chair and Director of the BBA Program, and Professor of Management. Her teaching focuses on leadership, ethics, and organizational behavior, and her research interests pertain to the same areas with specific focus on workplace spirituality and leadership awareness. She has been widely published in prestigious scholarly journals such as Journal of Business Ethics, Journal of Management Development, Business and Society, Journal of Organizational Analysis, Organization Development Journal, Human Resource Development Quarterly, Journal of Global Responsibility, Journal of Communication Management, International Journal of Organizational Analysis, and many others. Joan has authored/co-authored/co-edited more than 14 books on management and leadership topics, including Business and Buddhism (2015), in which Buddhism is approached as a leadership psychology, and Leading and Mindful Behavior Action, Wakefulness (2014), in which she provides directives to leaders to adopt a wakeful mindset and abstain from the sleepwalking mode. She is also the author of Courage in the Twenty-First Century (2013) and The Awakened Leader (2007), and co-author of, among others, Leading Spiritually (2014), Business Administration Education (2012), Laughter is the Best Teacher (2011), Stories to Tell Your OB Students (2011), From Me to We (2011), Managing in the 21st Century (2011), The Workplace and Spirituality (2009), and Spirituality in the Workplace (2007). Joan is a co-founder and editor-in-chief of three scholarly journals: The Business Renaissance Quarterly, Journal of Global Business Issues, and Interbeing, Journal of Personal and Professional Mastery. She presents a weekly radio program titled "De Andere Kant" (The Other Side) on Mart Radio, and has been a long-time columnist for De Ware Tijd (The True Times), one of the largest newspapers in Paramaribo, Suriname. More info about Joan Marques is available on her website, joanmarques.com.Satinder Dhiman, PhD, EdD, currently serves as a Professor of Management and as the Associate Dean, Chair, and Director of the MBA Program at Woodbury University's School of Business in Burbank, California. Professor Dhiman has also served as the Chair for a special MBA Program for Mercedes-Benz executives, China. He also serves as Accreditation Mentor ans Site Team Leader for Accreditation Council for Business Schools and Programs (ACBSP) for various universities in America, Canada, Europe, and India. He has been recently elected as the President of International Chamber for Service Industry (ICSI), 2014-2016. He has also completed advanced Executive Leadership Programs at Hartford, Standford, and Wharton. Recipient of several national and international academic and professional honors, Dr. Dhiman won the Woodbury University Ambassador of the Year Award 2015; Steve Allen Excellence in Education Award in 2006, and the prestigious ACBSP International Teacher of the Year Award in 2004. In 2013, Dr. Dhiman was invited to be the opening speaker at the prestigious TeDx Conference @ College of the Canyons in Santa Clarita, California. He is the founder and Director of Forever Fulfilled, a Los Angeles-based Wellbeing Consultancy that focuses on workplace wellness and self-leadership,Dr. Dhiman' work has been published in multiple national and international journals, and he has authored, co-authored, and co-edited ten books on management and leadership over the last 7 years. His current research on fulfillment, which is also the theme of his book, Seven Habits of Highly Fulfilled People (Personhood Press, CA, 2012/.20145), is focused on transformative habits of the mind for attaining lasting joy and fulfillment in both personal and professional life. In his most recent book, Ghandhi and Leadership (Palgrave Macmillan, USA, 2015), Dr. Dhiman offers perceptive insights into the spiritual and moral mainstay of Gandhi's exemplary leadership and its abiding influence on the world today.