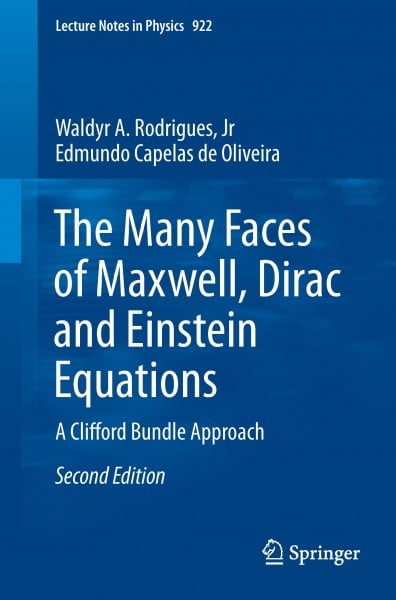 The Many Faces of Maxwell, Dirac and Einstein Equations

The Many Faces of Maxwell, Dirac and Einstein Equations
A Clifford Bundle Approach

This book is an exposition of the algebra and calculus of differentialforms, of the Clifford and Spin-Clifford bundle formalisms, and of vistas to aformulation of important concepts of differential geometry indispensable for anin-depth understanding of space-time physics.The formalism discloses the hidden geometrical nature of spinor fields.Maxwell, Dirac and Einstein fields are shown to have representatives by objectsof the same mathematical nature, namely sections of an appropriate Cliffordbundle. This approach reveals unity in diversity and suggests relationshipsthat are hidden in the standard formalisms and opens new paths for research.This thoroughly revised second edition also adds three new chapters: on the Cliffordbundle approach to the Riemannian or semi-Riemannian differential geometry ofbranes; on Komar currents in the context of the General Relativity theory; andan analysis of the similarities and main differences between Dirac, Majoranaand ELKO spinor fields.The exercises with solutions, thecomprehensive list of mathematical symbols, and the list of acronyms andabbreviations are provided for self-study for students as well as for classes.From the reviews of the firstedition:"The text is written in a veryreadable manner and is complemented with plenty of worked-out exercises whichare in the style of extended examples. ... their book could also serve as atextbook for graduate students in physics or mathematics." (AlbertoMolgado, Mathematical Reviews, 2008 k) von Rodrigues, Waldyr A. und Capelas de Oliveira, Edmundo

Waldyr Alves Rodrigues Jr, full professor of Mathematical Physics, at the State University of Campinas, São Paulo, Brazil, received his BSc from the University of São Paulo, and his PhD from the University of Torino, Italy. He has held various positions at Brazilian and European universities, one of them being director of the Institute of Mathematics, Statistics and Scientific Computation, State University of Campinas (IMECC-UNICAMP) from 1994 to1998. He has more than 40 years of teaching experience in more than 70 courses at graduate and post-graduate levels. As a researcher he received many grants, and various prizes - especially in 2012 he won the Paul Sabatier honor medal in 2012 for his contributions to applications of Clifford algebras to mathematical physics. He is the editor-in-chief of the journal "Advances in Applied Clifford Algebras".Edmundo Capelas de Oliveira is a member of the Mathematical Physics Group at the State University of Campinas, Sao Paulo, Brazil. He received his PhD in Physics in 1982, and became a full professor in Applied Mathematics in 2015. His research topics involve projective relativity, differential equations, complex analysis and fractional calculus. He is author of several successful textbooks (in Portuguese), teaches undergraduate as well as graduate courses, and held positions as Library Coordinator, Graduate Studies Coordinator of the Department and Associate Director of the Institute.