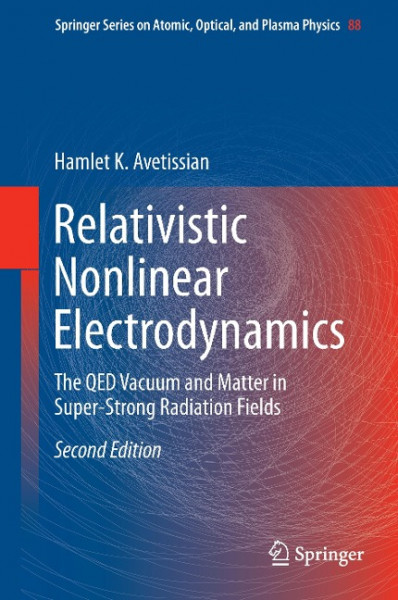 This revised edition of the author's classic 2006 text offers a comprehensively updated review of the field of relativistic nonlinear electrodynamics. It explores the interaction of strong and super-strong electromagnetic/laser radiation with the electromagnetic quantum vacuum and diverse types of matter - including free charged particles and antiparticles, acceleration beams, plasma and plasmous media.  The appearance of laser sources of relativistic and ultra-relativistic intensities over the last decade has stimulated investigation of a large class of processes under such super-strong radiation fields.Revisions for this second edition reflect these developments and the book includes new chapters on Bremsstrahlung and nonlinear absorption of superintense radiation in plasmas, the nonlinear interaction of relativistic atoms with intense laser radiation, nonlinear interaction of strong laser radiation with Graphene, and relativistic nonlinear phenomena in solid-plasma targets under supershort laser pulses of ultrarelativistic intensities.The only book devoted to the subject of relativistic nonlinear electrodynamics, this second edition will be a valuable resource for graduate students and researchers involved in any aspect of the field, including those working with intense x-ray - gamma-ray lasers, the new generation of small size laser-plasma accelerators of superhigh energies and high-brightness particle beams. von Avetissian, Hamlet Karo

Hamlet Avetissian is Chair of the Department of Quantum Electronics and Scientific Head of the Laboratory of Nonlinear Electrodynamics, Yerevan State University, Armenia.  Prof. Avetissian is author of the discovery of several non-linear phenomena and more than 100 publications. Scientific leader in 3 doctorate and 15 Ph.D. dissertations.  Founder of the "Plasma Physics" specialization and Scientific Research Laboratory of Plasma Physics, Laboratory of Nonlinear Electrodynamics in the Yerevan State University.