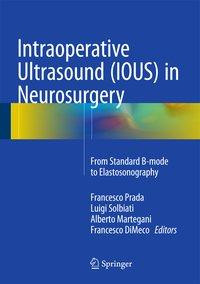 Intraoperative Ultrasound (IOUS) in Neurosurgery
From Standard B-mode to Elastosonography

This book is intended as a practical manual on the use of intraoperative ultrasound (IOUS) as a tool for imaging guidance during cranial and spinal neurosurgical procedures. Full account is taken of the emergence of novel clinical applications and recent technical advances, with extensive coverage of the impact of developments such as improved probe technology, fusion imaging and virtual navigation, 3D ultrasound imaging, contrast-enhanced ultrasound, and elastosonography. Basic principles of ultrasound are elucidated in order to assist in the optimal use of IOUS and clear guidance is provided on the interpretation of imaging findings in various pathologies. Informative comparisons are also made of the use of techniques such as fusion imaging and contrast-enhanced ultrasound in general radiology and neurosurgery. The aim of the authors is to enhance the general knowledge regarding intra-operative ultrasound brain imaging, standardizing its use and exploring new techniques, leading in some way toward compensating the lack of specific training in the application of ultrasound among the neurosurgical community. IOUS is a sensitive tool that can improve surgical precision and help to reduce morbidity. von Prada, Francesco

Francesco Prada is staff neurosurgeon in the 1st Neurosurgical Division of the Department of Neurosurgery at the Fondazione IRCCS Istituto Neurologico C.Besta in Milan, Italy, where he received his surgical training with professor S. Giombini, before starting to work under Professor F. DiMeco's guidance, developing his interest between clinical practice and research focusing on skull base surgery and neuro-oncology. He is currently leading the "Intra-operative Ultrasound in Neurosurgery Project", started in 2009, and has infact performed more than 500 image guided ultrasound procedures. He particularly focuses on the intra-operative applications of ultrasound for the treatment of cerebral and spinal tumor and vascular lesions. He is currently developing advanced ultrasound techniques in neurosurgery, such as Fusion Imaging for Virtual Navigation, contrast enhanced ultrasound (CEUS) and elastosonography. His interest for diagnostic and therapeutic US applications lead to his involvement in the "TheraGlio" project, aimed at the development of multimodal contrast agents. He has further interest in alpinism and has obtained the diploma in mountain medicine of the "Union Internationale des Associations d'Alpinisme": he is currently investigating the physiopathological mechanism of cerebral edema in high altitude mountain sickness. Dr. Prada has published 36 original articles in peer-reviewed journals and 2 chapters in textbooks of Neurosurgery and has been Editor and Reviewer of numerous scientific publications. He has given presentations and lectures at national and international meetings. Luigi A. Solbiati was Chairman of the Department of Oncology and Head of the Division of Interventional Oncologic Radiology at the Hospital of Busto Arsizio (Milan area, Italy) for 13 years and has been Contract Professor of Techniques and Methods of Diagnostic Imaging at the University of Milan since 1988. In July 2015 he became Professor of Radiology at Humanitas University and Research Hospital in Milan. His main fields of interest have always been small parts ultrasound, interventional procedures in oncologic diseases (particularly tumor ablation), imaging of the neck and contrast-enhanced sonography. He was one of the pioneers of ultrasound-guided aspiration biopsies (1979), ethanol injection of solid tumors (1983) and fusion imaging for the guidance of interventional procedures (2003). He has one of the largest world experiences in the treatment of liver malignancies with radiofrequency ablation (RFA) and, more recently, high-power microwaves, accounting for more than 2,200 patients. Prof. Solbiati has published 112 original articles in peer-reviewed journals and 81 chapters in textbooks of Radiology, Interventional Radiology and Oncology and has been Editor of 11 books on small-parts sonography, contrast-enhanced sonography and ablative therapies. He has given more than 550 presentations at Meetings in 36 different countries. In 2006 Prof. Solbiati chaired the 1st World Conference on Interventional Oncology (Cernobbio, Italy) and in 2013 the 1st Interventional Oncology Sans Frontieres Congress (IOSFC) (Cernobbio, Italy). His H-index is currently 41, his impact factor exceeds 400 and his publications had more than 10,800 citations.