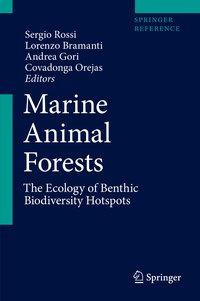 During the last decades there has been an increasing evidence of drastic changes in marine ecosystems due to human-induced impacts, especially on benthic ecosystems. The so called "animal forests" are currently showing a dramatic loss of biomass and biodiversity all over the world. These communities are dominated by sessile suspension feeder organisms (such as sponges, corals, gorgonians, bivalves, etc.) that generate three-dimensional structures, similar to the trees in the terrestrial forest. The animal forest provide several ecosystem services such as food, protection and nursery to the associated fauna, playing an important role in the local hydrodynamic and biogeochemical cycles near the sea floor and acting also as carbon sinks. The present book focus its attention on these three dimensional animal structures including, for the first time, all the different types of animal forests of the world in a single volume. von Rossi, Sergio und Bramanti, Lorenzo und Gori, Andrea und Orejas, Covadonga

Sergio RossiSergio Rossi is a research scientist specialized in marine natural resources and biological oceanography, focusing his attention in the health indicators of coastal benthic populations, coastal biological processes, flows of matter and energy in the benthic-pelagic coupling system, in the transplantation and aquaculture of marine organisms, and the management and conservation of marine wildlife. He is especially interested in the processes and conservation of the marine animal forests of the world.Lorenzo Bramanti Lorenzo Bramanti is a Marine Ecologist expert in conservation, spatial distribution, population and metapopulation dynamics of benthic suspension feeders. His field of research is at the interconnection between functional ecology and conservation biology, focussing on the demographic processes regulating the dynamics of long living species, in particular corals, and their implications for conservation and marine spatial planning.Andrea GoriAndrea Gori is a marine biologist working on the study of the ecology and ecophysiology of marine ecosystem engineering species to provide understanding for the sustainable management and conservation of marine ecosystems located from the coastal area to the continental shelf and slope. The research has been developed combining SCUBA diving with the use of Remotely Operated Vehicles and manned submersibles for the extensive study of benthic species over their entire spatial distribution, as the best way to achieve a comprehensive understanding of their ecology and the variability of their responses to environmental features and human induced stressors.Covadonga OrejasCovadonga Orejas is a benthic ecologist, specialized on the study of Cold-water corals. Her main research interests focus on the biology and ecology of benthic communities dominated by those organisms and in general on the Marine Vulnerable Ecosystems (MVE). Her research deal with the study of the occurrence and spatial distribution patterns of CWCs linking those with their eco-physiological responses; she also investigate the species auto-ecology in order to understand their trophic ecology, reproduction and growth. She carried out most of her research on deep shelf areas in different oceans, using mostly non-invasive methods and applying her studies to the conservation of these fragile ecosystems.