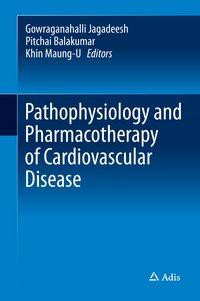 Pathophysiology and Pharmacotherapy of Cardiovascular Disease

Pathophysiology and Pharmacotherapy of Cardiovascular Disease

The present book covers the basic principles of cardiovascular physiology, pathophysiology and advanced pharmacology with particular emphasis on cellular mechanisms of drug action. It provides an update on the progress made in several aspects of cardiovascular diseases so that it might kindle scientists and clinicians alike in furthering basic and translational research. In addition, the book is expected to fill imperative gaps in understanding and optimally treating cardiovascular disease.   von Jagadeesh, Gowraganahalli und Balakumar, Pitchai und Maung, Khi

Dr. Gowraganahalli Jagadeesh has been working for the U.S. Food and Drug Administration as Senior Expert Pharmacologist in the Division of Cardiovascular and Renal Products. Dr. Jagadeesh received his undergraduate degree in pharmacy followed by MS and Ph.D degrees in Pharmacology from All India Institute of Medical Sciences, New Delhi and Banaras Hindu University, India, respectively. He was a Canadian Heart Foundation Fellow and NIH staff scientist at Canada, and Boston, respectively. Dr. Jagadeesh was an Adjunct Scientist at the NIH, Bethesda, while working at the FDA. His research areas have been in Cardiovascular Pharmacology. He has authored around 40 scientific papers and edited 3 books.Dr. Pitchai Balakumar has been working as Associate Professor and Head of Pharmacology Unit at the Faculty of Pharmacy, AIMST University, Malaysia. Dr. Balakumar obtained M.Pharm and Ph.D degrees from Punjabi University, India. He has a vast teaching, research and editorial experience in the field of Cardiovascular Sciences, and trained several graduates. Dr. Balakumar edited 2 special issues, and published  over 90 scientific papers in the areas of Cardiovascular, Diabetic and Renal Pharmacology. He received Top Reviewer Award from the Journal, Pharmacological Research. He is on the Editorial Team of Pharmacological Research, and Journal of Cardiovascular Disease Research.Dr. Khin Maung U has been working as Senior Medical Officer in the Division of Cardiovascular and Renal Products, U.S. Food and Drug Administration, which he joined in 1996. His academic affiliations include Associate Professor, Hahnemann University School of Medicine (1991-1993) and Assistant Professor, Johns Hopkins University School of Medicine (1992-1995). Dr. Maung-U obtained his M.B., B.S, and M.Med.Sc. degrees from the Institute of Medicine I, Yangon, Myanmar, and Doctor of Medicine degree from the University of New South Wales, Sydney, Australia. He is Board Certified by the American Board of Internal Medicine. Dr. Maung-U has conducted many clinical trials, and published around 50 research papers.