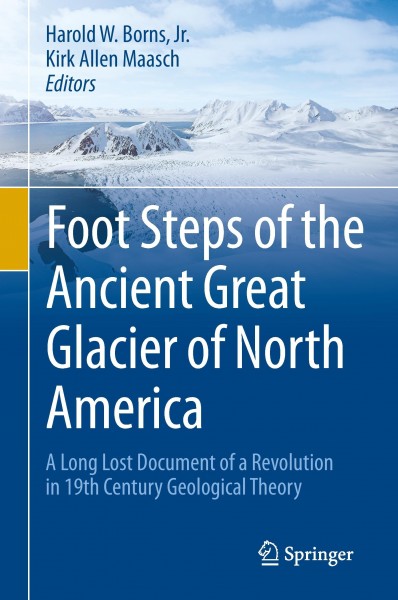 Foot Steps of the Ancient Great Glacier of North America

John K. DeLaski, M.D. practiced medicine in the Penobscot Bay region of Maine and, in addition, was a naturalist with keen powers of observation. His study of the landscape led to the conclusion that a thick glacier had overtopped the highest hills, flooded all of Penobscot Bay, extended far to the east and west and probably was part of a greater continental glacier. He published these very critical field observations and inferences in numerous articles in local newspapers and magazines, and in the American Journal of Science in 1864. His work put him on the "team" of Benjamin Silliman, James D. Dana and Louis Agassiz as an advocate for glaciation as the regional land shaping force opposed to that of the Biblical Deluge, a major scientific conflict of the day both in North America and Europe. He remained a shadowy player, in the background, but clearly contributed critical observations to the argument through personal interactions with Agassiz and other prominent naturalists. They incorporated DeLaski's observations into their own presentations, often without giving him credit. John DeLaski's summary work, a 400 page handwritten manuscript for the book, "The Ancient Great Glacier of North America", was dated 1869. He died in 1874 and the book was not published. The historic significance of DeLaski's unpublished book is based upon its startling contribution to one of the major scientific questions of the day of whether the surficial geology of northern U.S. and Canada was caused by the actions of the Biblical Flood or by continental glaciation. If published, this would have been the first book on this continent, at least, to present a holistic discussion of the controversy in which he presented his critical observations of the surficial geology in Maine, southern New England and New Brunswick, Canada and concluded that these depositional and erosional features must be of glacial origin. DeLaski then incorporated other evidence into the book for glaciation reported by others from the region during a decade or two, and from the mid and far west and Canada to advocate that the entire region was covered by an ice sheet that was at least 5,000 feet and probably much thicker over interior northern U.S. and Canada and which terminated along a glacial margin which extended from southern new England as far westward along the courses of the Ohio, and Missouri Rivers. All this was done while most "naturalists" still advocated the Biblical Flood to explain the major components of the surficial geology in North America and abroad. DeLaski's book containing his critical observations of clearly so many landscape features of glacial origin, if published would have been a pivotal document that would have strongly supported those arguing for glaciations in the glaciations vs. flood international argument. von Borns, Harold W. und Maasch, Kirk Alle

Harold William Borns, Jr. is Professor Emeritus of Glacial and Quaternary Geology at the University of Maine. He has taught geology for 50 years and in retirement has continued Ice Age field research projects in Maine, Denmark and Ireland. Professor Borns has had published about 150 peer-reviewed scientific journal articles, made many geological maps for the Maine Geological Survey and has co-authored one book on the Ice Age. He spent 28 field seasons leading glacial geological research teams in Antarctica and served as Program Manager for Polar Glaciology in the Office of Polar Programs at the U.S. National Science Foundation for three years. He formed the "Climate Change Institute" at the University of Maine in 1973 and served as its director for the first 15 years.Kirk Allen Maasch is Professor of Climate Studies at the School of Earth and Climate Sciences and the Climate Change Institute at the University of Maine. He has had published over 60 peer-reviewed scientific journal articles and book chapters, and has co-edited one book on climate and culture.