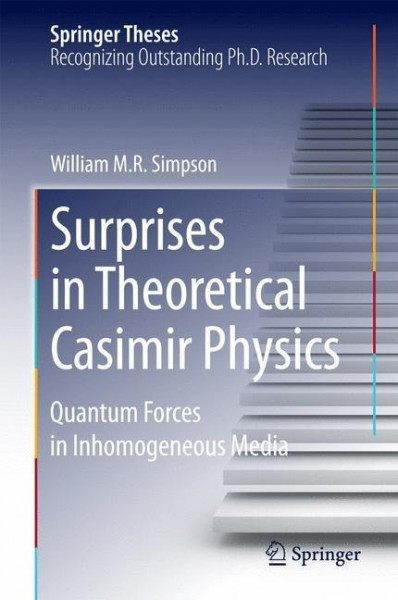 Despite more than half a century of theoretical work, the Casimir effect is still not as fully understood as some suppose. In this treatise, the author uncovers new puzzles and paradoxes concerning this mysterious phenomenon. In particular, he clearly demonstrates that the most sophisticated theories fail when confronted with dielectrics in which the refractive index is not uniform but gradually changes. von Simpson, William

William Simpson is a postdoctoral fellow at The Weizmann Institute, Israel. He completed his PhD at the University of St Andrews in 2014, having graduated with a first class MPhys in Theoretical Physics and Mathematics in 2010 and been awarded a SUPA Prize Doctoral Studentship. During the course of his research on Casimir forces, William was a visiting student at the University of Trento and The Weizmann Institute. He also founded a Physics & Philosophy Society (PhysPhil), and was the chief organiser of St Andrews' first two Philosophy of Physics conferences and the Foundations of Casimir Physics symposium in Stockholm.