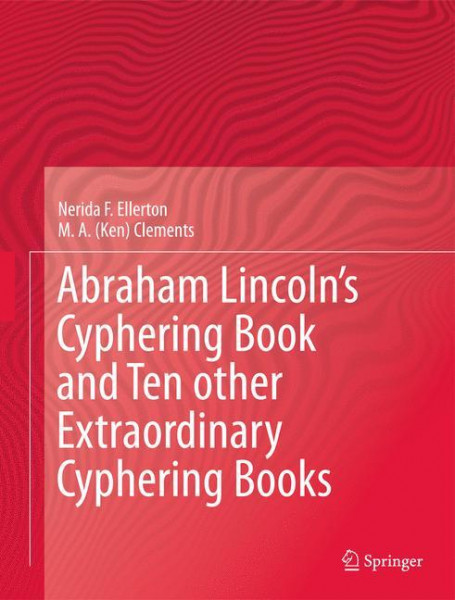 This well-illustrated book provides strong qualitative and comparative support for the main arguments developed by Nerida Ellerton and Ken Clements in their groundbreaking Rewriting this History of School Mathematics in North America 1607¿1861: The Central Role of Cyphering Books. Eleven extraordinary handwritten school mathematics manuscripts are carefully analyzed¿six were prepared entirely in Great Britain, four entirely in North America, and 1 partly in Great Britain and partly in North America. The earliest of the 11 cyphering books was prepared around 1630, and the latest in 1835. Seven of the manuscripts were arithmetic cyphering books; three were navigation cyphering books, and one was a mensuration/surveying manuscript.One of the cyphering books examined in this book was prepared, over the period 1819¿1826, by a young Abraham Lincoln, when he was attending small one-teacher schools in remote Spencer County, Indiana. Chapter 6 in this book provides the first detailed analysis of young Abraham¿s cyphering book¿which is easily the oldest surviving Lincoln manuscript. Another cyphering book, this one prepared by William Beattie in 1835, could have been prepared as a special gift for the King of England. The analyses make clear the extent of the control which the cyphering tradition had over school mathematics in North America and Great Britain between 1630 and 1840.In their final chapter Ellerton and Clements identify six lessons from their research into the cyphering tradition which relate to present-day circumstances surrounding school mathematics. These lessons are concerned with sharp differences between intended, implemented and attained curricula, the remarkable value that many students placed upon their cyphering books, the ethnomathematical circumstances which surrounded the preparations of the extraordinary cyphering books, and qualitative differences between British and North American school mathematics. von Clements, M. A. (Ken) und Ellerton, Nerida F.