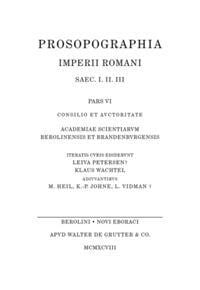 The Prosopographia Imperii Romani (PIR) is a dictionary of names containing the biographical data of Roman officials. The prosopography's main objective is to present a comprehensive listing of the ruling classes in the Roman Empire in its early and high stages. It covers the period starting with the Battle of Actium in 31 BC, which saw the final establishment of a monarchic system in Rome, and ends with the reign of Diocletian (284-305). To date, some 15.000 persons have been registered. The PIR is published entirely in Latin. von Petersen, Leiva und Wachtel, Klaus