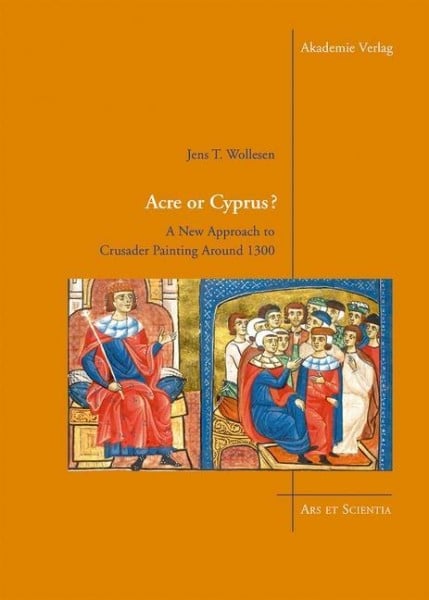 Acre or Cyprus?
A New Approach to the Crusader Painting Around 1300

What is it that makes thirteenth-century Acre the most likely location for the production of "Crusader art" manuscripts? Jens T. Wollesen claims that it is not Acre itself, but the idea of "Crusader art" which is tied to Acre! Acre was the least reasonable and France or Cyprus the more credible origin for many of these manuscripts. Wollesen investigates certain critical issues of the "Crusader art" narrative, and dismantles the style-oriented approach which has become the corner stone of past publications. He calls on the material witnesses central to the "Crusader art and Acre" claim: the Arsenal Bible, the Perugia Missal, and the London "Histoire Universelle". To suggest a different view on the Acre or Cyprus conundrum, he introduces new testimony such as the huge panels with the Carmelite Mary and St. Nicholas in the Makarios III Foundation in Nicosia on Cyprus and their backgrounds, and evaluates the reality of contemporary pictures. It is time to think of new ways of tackling the problems within the art-historical realm in terms of hierotopy, anthro¬pology, material culture, and agency. This book is meant to be a step into that direction. von Wollesen, Jens