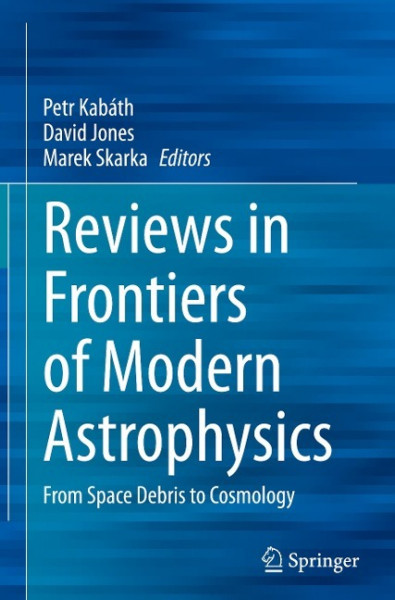 Reviews in Frontiers of Modern Astrophysics

Reviews in Frontiers of Modern Astrophysics
From Space Debris to Cosmology

This book presents a collection of focused review papers on the advances in topics in modern astronomy, astrophysics, cosmology and planetary science. The chapters are written by expert members of an EU-funded ERASMUS+ program of strategic partnership between several European institutes. The 13 reviews comprise the topics: Space debris, optical measurements Meteors, light from comets and asteroids Extrasolar enigmas: from disintegrating exoplanets to exo-asteroids Physical conditions and chemical abundances in photoionized nebulae from optical spectra Observational Constraints on the Common Envelope Phase A modern guide to quantitative spectroscopy of massive OB stars Explosion mechanisms of core-collapse supernovae and their observational signatures Low-mass and substellar eclipsing binaries in stellar clusters Globular cluster systems and Galaxy Formation Hot atmospheres of galaxies, groups, and clusters of galaxies The establishment of the Standard Cosmological Model through observations Exploiting solar visible-range observations by inversion techniques: from flows in the solar subsurface to a flaring atmosphere Starburst galaxies The book is intended for the general astronomical community as well as for advanced students who could use it as a guideline, inspiration and overview for their future careers in astronomy. von Kabáth, Petr und Jones, David und Skarka, Marek

Petr Kabath obtained a degree in physics from Freie Universitat Berlin in 2006. Later, he started to work on his Phd thesis on exoplanets at Deutsches Zentrum für Luft- und Raumfahrt in Berlin in group of Prof. Heike Rauer. His Phd thesis was successfully defended in 2009 and he joined European Southern Observatory as an ESO Paranal Fellow. In 2013, he changed to a staff astronomer position at Paranal Observatory and in 2015 he obtained a Purkyne Fellowship from Czech Academy of Sciences awarded for returning young scientists. Petr Kabath works currently at the Astronomical Instiute of the Czech Academy of Sciences in Ondrejov, Czech Republic where he is leading a new exoplanet research group. Petr Kabath published more than 36 refereed papers and numerous proceedings and other non-refereed publications. He also devoted his time to career enhancement of young astronomers and he is also regularly publishing articles about astronomy for general public. David Jones received his Phd in 2011, from the University of Manchester's Jodrell Bank Centre for Astrophysics, for his work on the morphologies and kinematics of planetary nebulae. He has also worked at the European Southern Observatory's Paranal Observatory, the Universidad de Atacama and the Isaac Newton Group of Telescopes, and is currently based at the Instituto de Astrofísica de Canarias on the Spanish island of La Palma. He is the author of more than 40 refereed papers covering topics ranging from near-Earth asteroids to supernovae type Ia. Since 2018, he is a member of the organizing committee of the International Astronomical Union's Planetary Nebulae commission.Marek Skarka got his PhD at Department of Theoretical Physics and Astrophysics (DTPA), Masaryk University, Brno, Czech Republic. He is currently working at DTPA (awarded with the Postdoc@MUNI grant). Before that he spent 2 years at Konkoly Observatory in Budapest, Hungary and 1 year at the Astronomical institute of the Czech Academy of Sciences, Ondrejov, Czech Republic. His main interests are pulsating stars in binaries and exoplanets. He published 34 papers in refereed journals and 20 conference proceedings. His most important are works on RR Lyrae stars. He is a member of IAU, Variable Star and Exoplanet Section of the Czech Astronomical Society, main editor of the Open European Journal on Variable stars (OEJV). He is also experienced observer (60 nights spectroscopy, 200 photometry). He (co)supervised 8 undergraduate and graduate students.