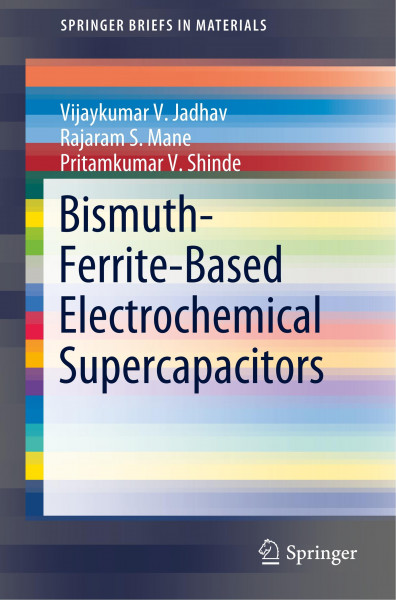 This book provides a much-needed, up-to-date overview of unary, binary and ternary bismuth-ferrite-based systems, with a focus on their properties, synthesis methods and applications as electrochemical supercapacitors. It introduces readers to the basic structure and properties of ferrites in general, focusing on the selection criteria for ferrite materials for electrochemical energy storage applications. Along with coverage of ferrite synthesis methods, it discusses bismuth-ferrite structures in unary, binary and mixed ferrite nanostructure systems, as well as future perspectives and limitations for using ferrites as electrochemical supercapacitors. A valuable resource for beginners and advanced researchers working on similar topics, this book enables them to understand the core materials and electrochemical concepts behind bismuth-ferrite-based systems as energy storage materials. von Jadhav, Vijaykumar V.

Dr. Vijaykumar V. Jadhav, MSc, NET, Ph.D. (Physics), is currently working as Research Scientist at Guangdong Technion, Israel Institute of Technology, Shantou, China. Also, he is an Assistant Professor in the Department of Physics, Shivaji College, Udgir, and affiliated with the S.R.T.M. University, Nanded, India and the Applied Nanoscience Group, School of Chemistry, University College of Cork, Ireland. He is a recipient of various prestigious fellowships including a Government of India, Government of Ireland IRC postdoctoral fellowship, where he worked with Prof. Colm O'Dwyer. His research work has attracted excellent collaborations, with many colleagues in Australia, Saudi Arabia, Korea, China, Ireland, and India with whom he has co-authored over 40 publications. Prof. Rajaram S. Mane received his Ph.D. in Physics from the Shivaji University, Kolhapur, India in 2000 and worked as a postdoctoral fellow at Hanyang University, Korea. He also was on the research faculty of Oxford University, Oxford, UK. Since 2010, he has been a regular professor at the S.R.T.M. University, Nanded, India and a visiting professor of Pusan National University, Korea. With more than 280 research articles, 7000 citations, an i10 index of 159 and h-index of 43, his major interests include synthesis of novel nanostructures for energy conversion and storage device technologies.