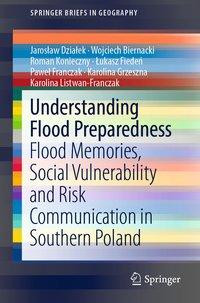 The book looks at the factors influencing the level of preparedness of communities exposed to flooding. It is based on original research carried out in twelve areas in southern Poland that suffered serious flood damage in the past thirty years. The underlying research was intended, on the one hand, to verify modern concepts explaining the behaviour of people who were exposed to natural hazards and, on the other, to explore the influence of the local natural, social, historical and economic contexts that could modify that behaviour. The book has three main threads: the social memory of floods and their image as it evolves in time; the influence of social and economic conditions (social vulnerability) on the preparedness to take on flood mitigation measures; and the role of risk communication in strengthening flood resilience. The main body of the work is based on 1) surveys carried out among the flood-affected population and members of local crisis services, 2) interviews with the flood-affected population and with members of administration and services (Police, Fire Dept.) with a history of rescue missions, and 3) an analysis of social media content and of local administration and government agency websites and land-use planning documents. The primary data collected by the authors was supplemented by statistics on the impact of floods occurring in the study areas. The data is presented in tables, graphs and maps for easier comprehension. The book is aimed at researchers and students, as well as at practitioners interested in risk perception, flood memories, social vulnerability & resilience studies, social capacity building, risk communication & education. von Dzialek, Jaroslaw

Dr. Jaroslaw Dzialek is Assistant Professor at the Institute of Geography and Spatial Management, Department of Regional Development at the Jagiellonian University in Krakow, Poland, where he also obtained a PhD in geography and sociology. His research interests include a focus on the social dimensions of local and regional development. He is the author and co-author of a number of books and papers on the following topics: geography of artists and creativity, cultural heritage and social capital building, social capital resources in Poland, perception of natural hazards.