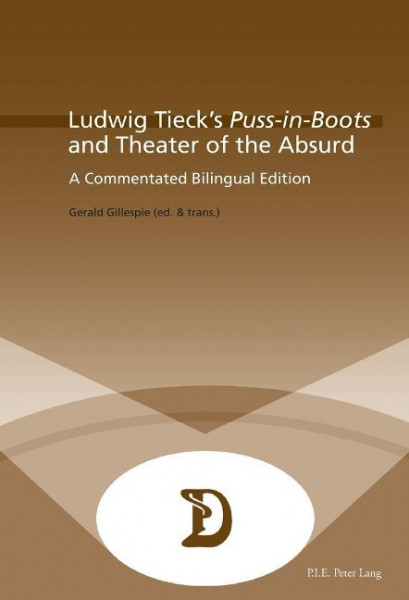 Ludwig Tieck's Puss-in-Boots and Theater of the Absurd

Johann Ludwig Tieck (1773-1853) was one of the most formative influences of the romantic movement, inspiring such major figures as Novalis and Hoffmann. Not only did his tales and novels shape the course of German romantic fiction; as a translator he helped to naturalize Shakespeare and Cervantes; as an editor he was among the first to recognize Kleist. Tieck's precocious invention of ironic-fantastic comedy quickly found resonance among fellow romantics, who worked under the parallel influence of the Goethean revolution in drama exhibited in Faust. Yet Tieck's play Puss-in-Boots (1797) had to wait a full century before its impulses were transmitted, by Pirandello, to modern anti-theater and theater of the absurd. The Tieckian direction anticipates the metaphysical strains both of symbolist and of existentialist theater and the beneficent absurdism of Wilder and Ionesco. As the boundary between stage and audience completely dissolves in Puss-in-Boots, we experience the transcendent delight of pure theater and unsettling doubts about our own roles on the world's stage. von Gillespie, Gerald

Gerald Gillespie is Professor Emeritus at Stanford University and a former President of the International Comparative Literature Association. He has held teaching and research appointments at various American, Asian, and European universities. He has published or edited some two dozen books on European and world literature and on the development of international comparative studies. An augmented second edition of his Proust, Mann, Joyce in the Modernist Context appeared in 2010.