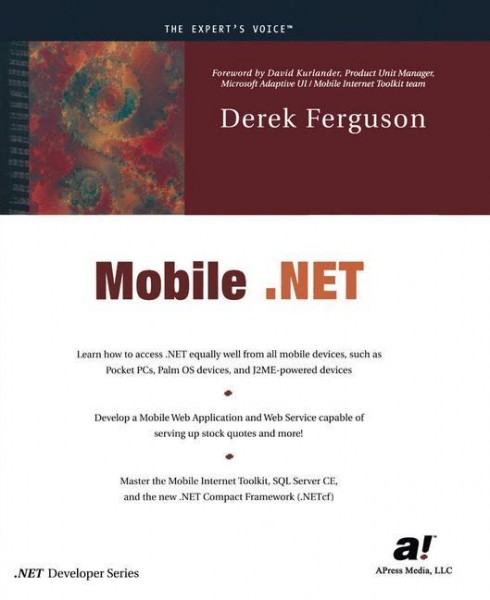 Mobile .NET begins by examining a wide variety of different wireless Internet devices. These devices are divided into two main divisions: those that are directly supported by .NET (Pocket PCs, i-Mode phones, and WAP devices) and those that are not (Palm OS and J2ME-powered devices). By the end of this book, you'll be able to make .NET work equally well with all of the devices.In the middle section of the book, the advantages of .NET as a development platform are first introduced. You'll produce a .NET web application capable of serving up stock quotes to virtually any wireless device as an exercise, building on it chapter by chapter. The section concludes with a demonstration of how you can invoke .NET Web services, the cornerstone of Microsoft's new "programmable Internet," from each of the wireless devices mentioned previously.Mobile .NET concludes by drilling deep down into the technologies provided by .NET specifically for use with wireless devices. The Mobile Internet Toolkit, which can automatically adapt the output of a .NET web application based upon the special needs of differing client devices, is discussed first. Next, Microsoft's mobile data strategy and the main technologies underlying it, SQL Server (CE and desktop versions), XML, and ADO.NET, are discussed. Finally, in a special technology sneak preview, author Derek Ferguson unveils Microsoft's mobile .NET technology, which brings the power of .NET development directly to handheld devices: the .NET Compact Framework. von Ferguson, Derek

Derek Ferguson is a world-renowned author, speaker, and developer who has been recognized throughout the IT industry for his work. He is chief technology evangelist for PocketDBA Systems, a pioneer and leader in the wireless database management industry. Ferguson has accrued numerous certifications as well as book-writing and speaking credits. He is a Microsoft Certified Solutions Developer (MCSD), a Sun Certified Java Programmer (SCJP), and a Certified Lotus Principal Professional (CLPP). His book credits include such popular titles as Broadband Internet Access For Dummies, MCSD Solution Architectures, and Debugging ASP. He has spoken at numerous international developers' conferences, including Wireless DevCon 2000 in San Jose and JavaOne 2001 in San Francisco. Ferguson graduated summa cum laude from DePaul University in Chicago with a bachelor of science degree in computer science.