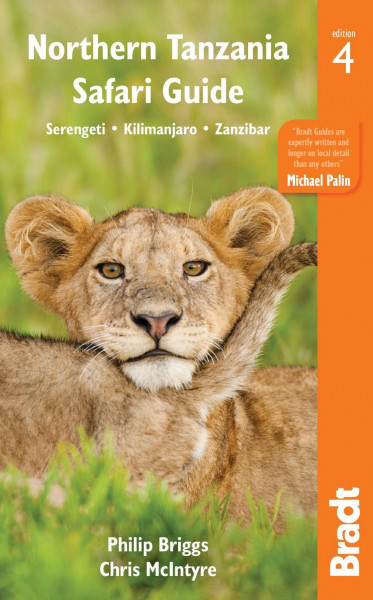 This thoroughly updated new edition of Bradt's Northern Tanzania Safari Guide remains the only full-length guidebook focussed exclusively on the northern part of the country and Zanzibar. Tailored closely to the requirements of anyone going on a safari to northern Tanzania, followed by a few days on Zanzibar, it provides far more detailed coverage of the local safari circuit and other main attractions than other guides. As such, it offers complete and detailed lodge listings and also goes into greater detail about wildlife and where to see it. It is also the only guide to include detailed information on the many new private concessions that have opened up. Northern Tanzania is dominated by Africa's finest safari circuit. Centred on the legendary Serengeti National Park and its world-famous wildebeest migration, this circuit also incorporates the Ngorongoro Crater and surrounding Ngorongoro Conservation Area, Lake Manyara and Tarangire National Parks. Geographically it is one of the most varied regions in Africa, with a palm-fringed Indian Ocean coastline complemented by the scenic wonders of the Great Rift Valley, Africa's largest lake, and several impressive volcanically formed mountains, most notably snow-capped Mount Kilimanjaro, the tallest peak in Africa and a popular goal for hikers. Lesser known gems include the prehistoric rock art at Kondoa (a UNESCO World Heritage Site), the forested Arusha National Park and Amani Nature Reserve, and the spectacular Ol Doinyo Lengai - Africa's most active volcano. Tanzania is home to more than 100 ethnic groups, from the Arab-influenced Swahili of the coast to the traditionalist Maasai pastoralists and Hadza hunter-gatherers of the Rift Valley, yet it takes pride in a long history of post-independence tolerance, stability and safety. Northern Tanzania offers spectacular game-viewing all year round, and supports some of the world's largest surviving populations of lions, elephants, buffalos, leopards, giraffes, zebra, wildebeest and gazelle. Serviced by a well-developed safari industry, the superlative reserves of northern Tanzania are complemented by a stopover on the legendary Spice Island of Zanzibar. With its atmospheric old town, idyllic beaches and offshore reefs teeming with marine life, it is every bit as evocative as its name. Bradt's Northern Tanzania Safari Guide is written by Philip Briggs, the world's leading write of guidebooks to Africa, and Chris McIntyre, CEO of specialist Africa tour operator Expert Africa. The guide reflects the growing trend away from large lodges towards small exclusive eco-friendly camps in remote parts of the Serengeti and other major reserves and this edition is more critically selective than previous editions, detailing the best on offer in all price brackets, making it the most authoritative source available. Northern Tanzania Safari Guide is an essential travel companion for both first-time visitors and seasoned safari-goers. von Briggs, Philip