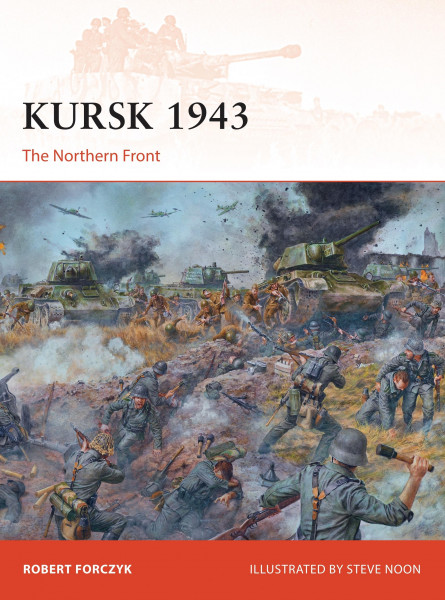 Kursk 1943 focuses on the northern front and the battle of Kursk, and period of July 5th to August 18th, 1943, covering both the German offensive and the Soviet counteroffensive - Model's AOK 9 pitted against General Konstantin Rokossovsky's Central Front.After recovering from the Stalingrad debacle, Hitler intended to conduct a limited objective offensive (using the new Panther and Tiger tanks) in the summer of 1943 in order to eliminate the Soviet Kursk salient. He intended to conduct a classic pincer attack of the kind that succeeded during the 1942 Kharkov campaign and hoped that the resulting heavy loss of troops and material inflicted on the Red Army would give the Wehrmacht time to recover its strength. Hitler chose two of his best field commanders - Generalfeldmarschall Erich von Manstein and Generaloberst Walter Model - to lead the two pincers against the Kursk salient in Operation Zitadelle. Manstein would attack from the south with Heeresgruppe Süd, while Model attacked from the north with his heavily reinforced AOK 9.Model was not in favor of the offensive because he believed the Soviet defenses were too dense, but he dutifully mounted a full-scale offensive from 5 to 10 July 1943. Model's forces included two battalions of the new Ferdinand tank destroyers and a battalion of Tiger tanks, but were only capable of chewing its way through the first line of Soviet defenses. Although Model had failed to accomplish a breakthrough, his forces were far from spent. When the Soviets mounted their own Operation Kutusov to collapse the German-held Orel salient, Model had sufficient forces left to conduct a fighting retreat back to the Hagen Line. By 18 August 18th 1943, the Soviets had liberated Orel and pushed Model's forces back, but suffered over 400,000 casualties and the loss of 2,500 tanks. The Germans had succeeded in gaining a tactical victory that mauled three Soviet tank armies, although the Red Army had achieved an operational-level victory by liberating Orel. von Forczyk, Robert