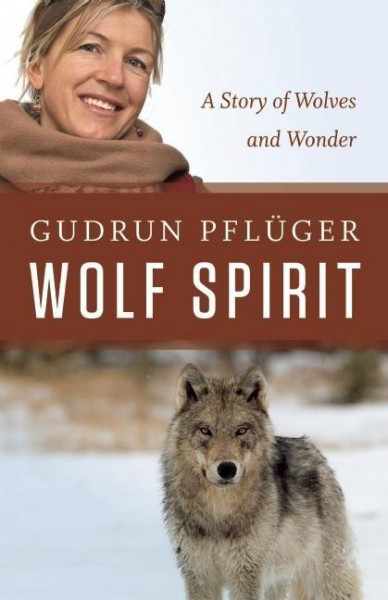 Wolf Spirit
A Story of Wolves and Wonder

"I really believe the encounter with the wolves in the wilderness was a powerful medication. They gave me strength.” - Gudrun Pflüger, in USA Today In 2005, elite marathon mountain runner and cross-country skier Gudrun Pflüger spent five weeks tracking and studying elusive coastal wolves by foot, kayak and sailboat along the rugged Pacific Coast of western Canada. Her daring and adventurous work as a field biologist eventually formed the basis for the Smithsonian Channel documentary A Woman Among Wolves. In the period between the completion of her research and the premier of this first documentary film, Pflüger was diagnosed with an aggressive brain cancer and told she had eighteen months to live. Eventually surgeons removed a tumour the size of a golf ball, and Pflüger underwent protracted chemotherapy and additional, non-conventional therapies in order to combat what some expected was an inevitable and all too common fate. During her prolonged and arduous recovery, she took the wolf - a true "endurance athlete” - as a model and re-immersed herself in what she hoped would be the restorative mountain environments of the British Columbia and Alberta backcountry in order to focus her traumatized mind and body on a path toward self-healing. Her difficult and reflective return to studying wolves in Canada led to another Smithsonian Channel documentary, Running With Wolves. It also included an event that defied the odds and astounded her doctors: after gruelling rounds of cancer treatment Gudrun became a mother, giving birth to a son, Conrad, in 2009. Through an intensely personal and emotional, yet rigorously scientific connection with the wolves she studies and the glorious landscape that surrounded her during this remarkable journey, Gudrun Pflüger tells an absorbing story of the transformative and healing power of nature, motherhood and one woman's goal to save the wolves she admires and bring her own threatened body and mind back to health. von Pfluger, Gudrun und Reichel, Tammi

Gudrun Pflüger grew up in the small Austrian town of Radstadt. She is a former professional cross-country skier and elite marathon mountain runner who earned the Mountain Running World Trophy in 1993, 1995, 1996 and 1997. She is also a certified field biologist who has spent years studying, tracking and advocating for wild wolves. After retiring from athletics, she relocated to western Canada, where she became involved in the conservation of British Columbia's coastal wolf population and also studied wild wolves in the Rocky Mountains of Alberta. Her research has been documented in the much lauded Smithsonian Channel films A Woman Among Wolves and Running With Wolves. To this day she continues to spend countless hours as an advocate for protecting wild wolf populations in her own country and abroad. Gudrun now lives near Salzburg, Austria, with her son, Conrad.