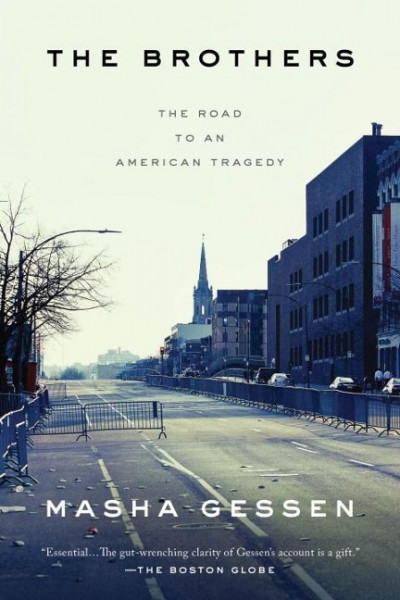 The Brothers: The Road to an American Tragedy

The Brothers: The Road to an American Tragedy

Look out for Masha Gessen's new book, THE FUTURE IS HISTORY, coming October 2017 "A gripping narrative and a stunning piece of investigative journalism… [that] gives us the human side to the story of two young men who must be understood as more than monsters" (Christian Science Monitor) On April 15, 2013, two homemade bombs exploded near the finish line of the Boston marathon, killing three people and wounding more than 264 others. In the ensuing manhunt, Tamerlan Tsarnaev died, and his younger brother, Dzhokhar, was captured and brought to trial. Yet even after the guilty verdict and the death sentence, what we didn't know was why. Why did the American Dream go so wrong for two immigrants? How did such a nightmare come to pass? Acclaimed Russian-American journalist Masha Gessen is uniquely able to tell us. A teenage immigrant herself, she returned to Russia to cover firsthand the transformations that wracked the region from the 1990s on. It is there that she begins her astonishing account of the Tsarnaev brothers, descendants of ethnic Chechens deported to Central Asia in the Stalin era. Following the family in their futile attempts to make a life for themselves in one war-torn locale after another and then, as new émigrés, in an utterly disorienting new world, she reconstructs the brothers' struggle between assimilation and alienation, which incubated a deadly sense of mission. And she traces how such a split in identity can fuel the metamorphosis into a new breed of homegrown terrorist, with feet on American soil but sense of self elsewhere.

Masha Gessen is a Russian-American journalist who is the author of several books, most recently the national bestseller The Man Without a Face: The Unlikely Rise of Vladimir Putin (Riverhead, 2012) and Words Will Break Cement: The Passion of Pussy Riot (R