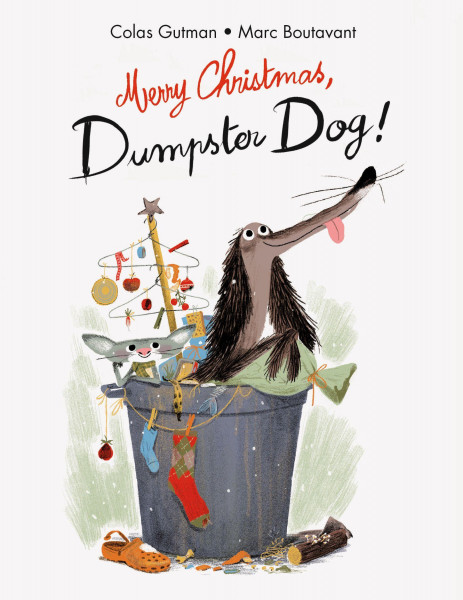 It's Christmas once again. But this year, Dumpster Dog and Flat Cat have decided they're going to celebrate in a house instead of their trash can! von Gutman, Colas

Born in Paris in 1972, Colas Gutman is an actor and author. He writes his novels in exactly the same position he took as a young boy doing his homework: stretched out on his bed or perhaps sitting in a chair, using a comic as his desk pad. His first work Rex, ma Tortue (Rex, My Turtle) appeared in 2006 and won the Mille Page Award. Gutman explores childhood and adolescence in his work with all of the lightness, angst, surrealism, and weirdness of those periods. In 2013, he invented the hilarious and endearing character of Dumpster Dog (Chien Pourri). The series has been a smashing success in France since the moment of its inception, and has spawned an animated series and a lot of fabulous Dumpster Dog notecards and dishrags, of course. Born in Dijon, France in 1970, Marc Boutavant is an award-winning author and illustrator. For years, Boutavant has drawn for picture books and comics, and he's done his fair share of editorial illustration as well. His cartoons and picture books have made him a widely sought after illustrator. Boutavant's lively, expressive, and inventive illustrations appeal to both children and their parents, for they are simple and complex, witty, playful, and probing all at the same time. His characters for the Dumpster Dog series have won the hearts of all French children and are in the process of generating love all over the world. Boutavant lives and works in Paris, France.