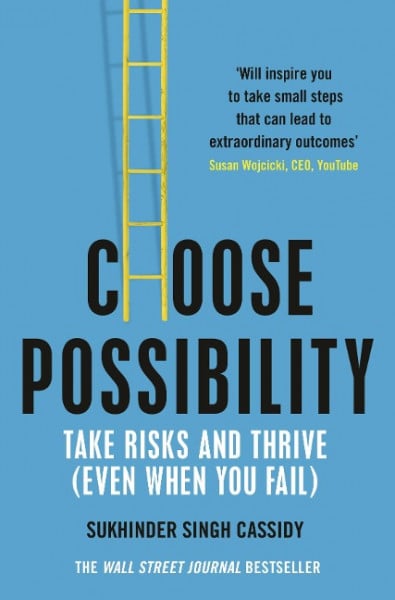 Choose Possibility
Task Risks and Thrive (Even When You Fail)

For everyone scared of making the wrong choice or taking great risk, Choose Possibility gives you the freedom to embrace and make change. von Cassidy, Sukhinder Singh

Sukhinder Singh Cassidy is a leading digital executive and entrepreneur with over twenty-five years of leadership experience scaling and founding companies including Google, Amazon, Yodlee, Joyus and Polyvore. She is currently founder and Chairman of theBoardlist, a premium talent marketplace for diverse executives, and most recently served as the President of StubHub, the leading global consumer ticketing marketplace for live entertainment. StubHub was acquired by Viagogo for $4bn, in a transaction led by Sukhinder and her team. Sukhinder also serves as a board director at Urban Outfitters (URBN) and Upstart, and has previously served as a board member at Ericsson, TripAdvisor, Stitchfix, J. Crew and as a strategic advisor to Twitter.For her work in the Internet industry, Cassidy has been profiled in numerous publications globally, including Forbes, Fortune, New York Times, Wall Street Journal, Bloomberg, Vanity Fair, Recode and more, as well as several leadership books. She has been named one of the Most Creative People in Business by Fast Company, one of the Top 100 People in the Valley by Business Insider; a 'Woman to Watch' by Forbes, Fortune and Ad Age; Techcrunch's first General Management Fellow; and one of the Top 100 Women of Influence in Silicon Valley.