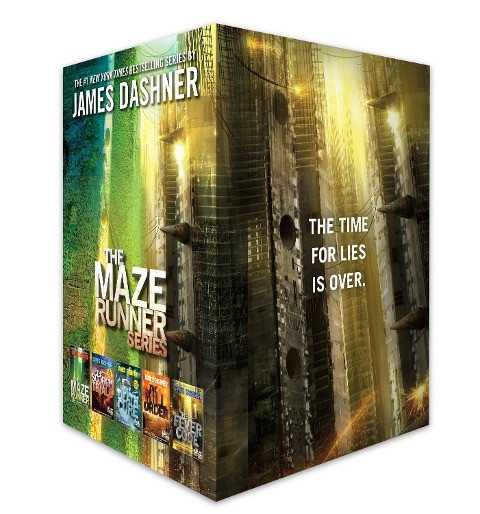 A must-have gift for every collection-from the die-hard Maze Runner fan to the YA book lover just coming to the series to the binge reader who's catching up before watching the blockbuster movie franchise! This boxed set has all five hardcover books in the #1 New York Times bestselling Maze Runner series: The Maze Runner, The Scorch Trials, The Death Cure, The Kill Order, and The Fever Code. When Thomas wakes up in the lift, the only thing he can remember is his name. He's welcomed to his new home, the Glade, by strangers-boys whose memories are also gone. Outside the towering stone walls that surround the Glade is a limitless, ever-changing maze. It's the only way out-and no one's ever made it through alive. Join Thomas and the Gladers in all five books in the Maze Runner series as they uncover the secrets of the maze; discover WICKED, the shadowy organization who put them there; and fight to survive in a new and dangerous world. Enter the World of the Maze Runner series and never stop running. The first three books, The Maze Runner, The Scorch Trials, and The Death Cure are all now major motion pictures that feature the star of MTV's Teen Wolf, Dylan O'Brien; Kaya Scodelario; Aml Ameen; Will Poulter; and Thomas Brodie-Sangster! Also look for James Dashner's newest bestselling series-The Mortality Doctrine: The Eye of Minds, The Rule of Thoughts, and The Game of Lives. Praise for the Maze Runner series: A #1 New York Times Bestselling Series A USA Today Bestseller A Kirkus Reviews Best Teen Book of the Year An ALA-YASLA Best Fiction for Young Adults Book An ALA-YALSA Quick Pick "[A] mysterious survival saga that passionate fans describe as a fusion of Lord of the Flies, The Hunger Games, and Lost."-EW "Wonderful action writing-fast-paced…but smart and well observed."-Newsday "[A] nail-biting must-read."-Seventeen "Breathless, cinematic action."-Publishers Weekly "Heart pounding to the very last moment."-Kirkus Reviews "Exclamation-worthy."-Romantic Times von Dashner, James

James Dashner is the author of the #1 New York Times bestselling Maze Runner series: The Maze Runner, The Scorch Trials, The Death Cure, The Kill Order and The Fever Code, as well as the bestselling Mortality Doctrine series: The Eye of Minds, The Rule of Thoughts, and The Game of Lives. Dashner was born and raised in Georgia, but now lives and writes in the Rocky Mountains. To learn more about him and his books, visit JamesDashner.com, follow @jamesdashner on Twitter, and find dashnerjames on Instagram.