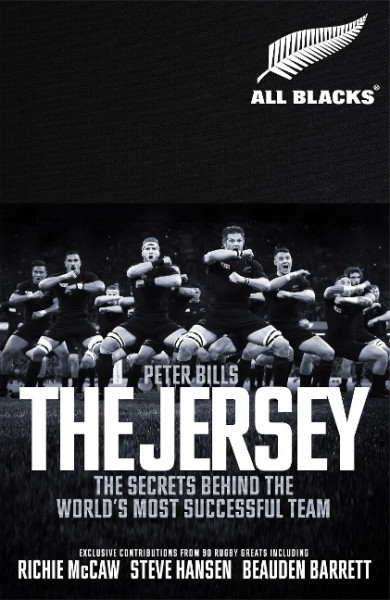 The Jersey
The All Blacks: The Secrets Behind the World's Most Successful Team

The All Blacks are the greatest sports team on the planet. With a better winning record than any other sports team in history, they stand head and shoulders above their nearest rugby rivals, and go to the 2019 World Cup as back-to-back World Champions. How did an island of just 4.8 million people conquer the world?Peter Bills, who has reported on international rugby for more than 40 years, was given exclusive access to all the key figures in New Zealand rugby as he set out to understand the secrets behind the All Blacks success. From Steve Hansen to Beauden Barrett, Richie McCaw to the late Sir Colin Meads, Peter Bills talked at length with over 90 people, both in New Zealand and around the world, with intimate knowledge of what makes the All Blacks tick.This is a story of the first settlers, and the 'Originals' who forged the All Blacks legacy, right through to modern times. It draws heavily on the contributions made by all New Zealanders: players, coaches, officials, supporters and those who have worn the most recognized jersey in the world. Intrinsically, The Jersey goes to the heart of the All Blacks success. It is also an epic story of not just a rugby team but a nation, whose identities are inextricably linked. Additionally, it debates a question, terrifying for any of their opponents. Could the All Blacks get even better? von Bills, Peter

Peter Bills is a world-renowned rugby journalist who has reported and written on the sport for more than forty years. He was given unprecedented access to the All Blacks to research The Jersey.