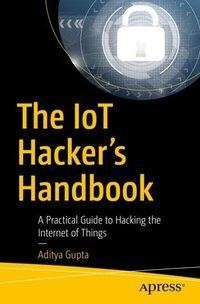 Take a practioner's approach in analyzing the Internet of Things (IoT) devices and the security issues facing an IoT architecture. You'll review the architecture's central components, from hardware communication interfaces, such as UARTand SPI, to radio protocols, such as BLE or ZigBee. You'll also learn to assess a device physically by opening it, looking at the PCB, and identifying the chipsets and interfaces. You'll then use that information to gain entry to the device or to perform other actions, such as dumping encryption keys and firmware. As the IoT rises to one of the most popular tech trends, manufactures need to take necessary steps to secure devices and protect them from attackers. The IoT Hacker's Handbook breaks down the Internet of Things, exploits it, and reveals how these devices can be built securely. What You'll LearnPerform a threat model of a real-world IoT device and locate all possible attacker entry points Use reverse engineering of firmware binaries to identify security issues Analyze,assess, and identify security issues in exploited ARM and MIPS based binariesSniff, capture, and exploit radio communication protocols, such as Bluetooth Low Energy (BLE), and ZigBee Who This Book is For Those interested in learning about IoT security, such as pentesters working in different domains, embedded device developers, or IT people wanting to move to an Internet of Things security role. von Gupta, Aditya

Aditya Gupta is the founder and CEO of Attify, Inc. - a specialized security firm offering IoT penetration testing and security training on IoT Exploitation. Over the past couple of years, Aditya has performed in-depth research on the security of these devices including smart homes, medical devices, ICS and SCADA systems, and has spoken at numerous international security conferences teaching people about the insecurity in these platforms and how it can be exploited. Aditya is also the co-author of the IoT Pentesting Cookbook and the author of Learning Pentesting for Android Devices.