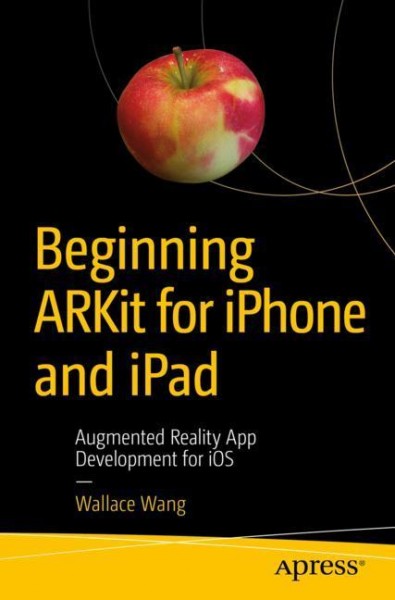 Beginning ARKit for iPhone and iPad

Explore how to use ARKit to create iOS apps and learn the basics of augmented reality while diving into ARKit specific topics. This book reveals how augmented reality allows you to view the screen on an iOS device, aim the camera at a nearby scene, and view both the real items in that scene as well as a graphic image overlaid on to that scene. You'll start by accessing the camera and teaching your app to track the world around its device. You'll then see how to position nodes and create augmented reality shapes and textures. Next you'll have your creations interact with their environment by programming workable physics, detecting planes, measuring distance, and applying virtual force. Finally you'll learn how to hit test and troubleshoot your applications to ensure they interact with the real world around them seamlessly.ARKit is Apple's software framework for creating augmented reality apps on iOS devices such as the iPhone and iPad. Unlike virtual reality that creates an entirely artificial world for the user to view and explore, Beginning ARKit for iPhone and iPad will show you how augmented reality places artificial items in an actual scene displayed by an iOS device's camera. What You'll LearnAccess the cameraUse ARKit's hit testing for tracked geometryApply and combine real world and virtual physicsWho This Book Is ForProgrammers familiar with the basics of Swift programming who want to dive into developing iOS applications with Swift. von Wang, Wallace

Wallace Wang has written more than 40 computer books, including macOS Programming For Absolute Beginners, Absolute Beginners Guide to Computing, Pro iPhone Development with Swift, and Android Apps for Absolute Beginners. In addition to programming with Swift, Java, and other languages for the Mac, iOS, and Android; he also performs stand-up comedy, having appeared on A&E s "Evening at the Improv," and having performed in Las Vegas at the Riviera Comedy Club at the Riviera Hotel & Casino. When he's not writing programming books or performing stand-up comedy, he also enjoys blogging about screenwriting at his site, The 15 Minute Movie Method, where he shares screenwriting tips with other aspiring screenwriters who all share the goal of breaking into Hollywood.