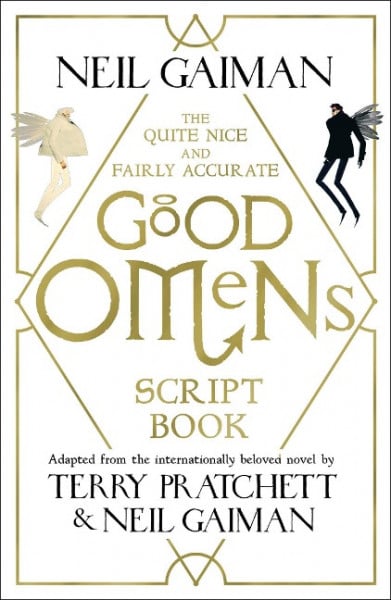 The Quite Nice and Fairly Accurate Good Omens Script Book

The Quite Nice and Fairly Accurate Good Omens Script Book

Diverting... pleasurable... entertaining' New York Times'Relevant and fresh... [Good Omens] still has a lot to say about the world' Empire'Even if you're very familiar with the original novel, this is a different experience... so damned charming and quirky that it feels like a must' StarburstNeil Gaiman's glorious reinvention of the iconic bestseller Good Omens, adapted from the internationally beloved novel by Terry Pratchett and Neil Gaiman, launched on Amazon Prime Video this year to great acclaim. Soon to be shown on the BBC, the series is written and show-run by Neil himself and stars David Tennant, Michael Sheen, Jon Hamm and Miranda Richardson, to name but a few.**This edition of The Quite Nice and Fairly Accurate Good Omens Script Book contains an introduction by Neil Gaiman about bringing Good Omens to the screen and all cut scenes** von Gaiman, Neil

Neil Gaiman is the bestselling author and creator of books, graphic novels, short stories, film and television for all ages, including Neverwhere, Coraline, The Graveyard Book, The Ocean at the End of the Lane, The View from the Cheap Seats and the critically acclaimed, Emmy-nominated television adaptation of American Gods. The recipient of numerous literary honours, Neil has written scripts for Doctor Who, worked with authors and artists including Terry Pratchett, Chris Riddell and Dave McKean, and Sandman is established as one of the classic graphic novels. In 2017, he became a Goodwill Ambassador for UNHCR, the UN Refugee Agency. As George R. R. Martin says: 'There's no one quite like Neil Gaiman.'