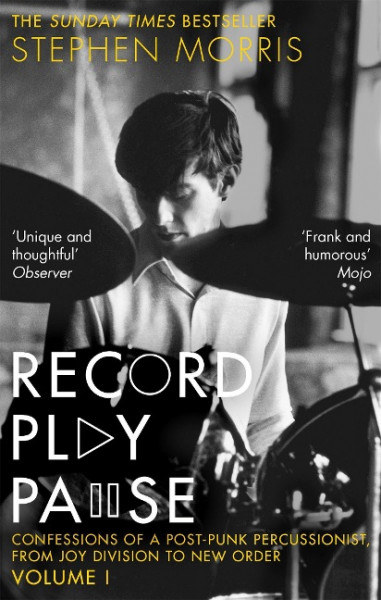 'Arguably the most human of the Joy Division memoirs, Record Play Pause shows that even after 40 years there are still new ways to engage with and illuminate this most analysed of groups' Mojo Before he was responsible for some of the most iconic drumming in popular music, Stephen Morris grew up in 1960s and '70s industrial Macclesfield, on a quiet road that led seemingly to nowhere. Far removed from the bright lights and manic energy of nearby Manchester, he felt stifled by suburbia and feared he might never escape. Then he joined Joy Division - while they were still known as Warsaw - a pioneer of the rousing post-punk sound that would revolutionise twentieth-century rock.Following two landmark albums and widespread critical acclaim, Joy Division were at the height of their powers and poised to break the US, when lead singer, Ian Curtis, committed suicide.Part memoir, part scrapbook and part aural history: Stephen Morris's innate sense of rhythm and verve pulses through Record Play Pause. From recollections of growing up in the North West to the founding of New Order, Morris never strays far from the music. And by turns profound and wry, this book subverts the mythology of and allows us to understand music's power to define who we are and what we become.'Gritty coming-of-age story' Daily Mirror 'Record Play Pause tells a familiar story . . . but Morris brings a freshness to it' Glasgow Herald von Morris, Stephen

Stephen Morris has been a consistent fixture in New Order since 1980. The band's long career has included multiple world tours and headlining appearances at festivals, as well as a performance at the closing concert for the 2012 Olympics.Outside of New Order, Morris has released albums and television soundtracks with his wife Gillian Gilbert under the name The Other Two, and has contributed in the studio and on tour to Bernard Sumner's project Bad Lieutenant. He is also well known for owning a collection of tanks, which he drives recklessly near his home.