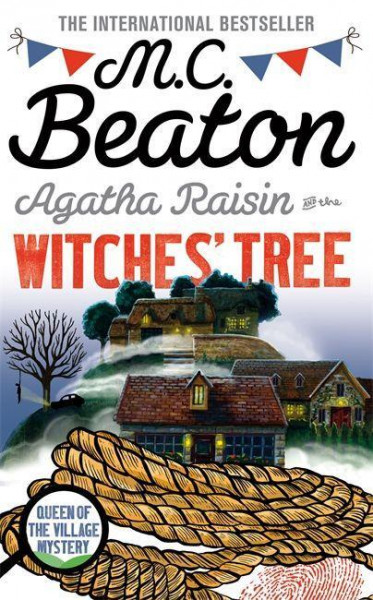 Agatha Raisin and the Witches' Tree

Agatha Raisin and the Witches' Tree

Praise for M. C. Beaton'Agatha is like Miss Marple with a drinking problem, a pack-a-day habit and major man lust. In fact, I think she could be living my dream life' Entertainment Weekly'The detective novels of M. C. Beaton, a master of outrageous black comedy, have reached cult status' The TimesToil and trouble in store for Agatha!Cotswolds inhabitants are used to bad weather, but the night sky is especially foggy as Rory and Molly Harris, the new vicar and his wife, drive slowly home from a dinner party in their village of Sumpton Harcourt. They struggle to see the road ahead - but then screech to a halt. Right in front of them, aglow in the headlights of their car, a body hangs from a lightning-blasted tree at the edge of town. But it's not suicide; Margaret Darby, an elderly spinster of the parish, has been murdered - and the villagers are bewildered as to who would commit such a crime, and why. Agatha Raisin rises to the occasion, delighted to have some excitement back in her life as, if truth be told, she was getting bored of the long run of lost cats and divorces on the books. But Sumpton Harcourt is an isolated and unfriendly village, she finds a place that poses more questions than answers. And when two more murders follow the first, Agatha begins to fear for her reputation - and her life. That the village has its own coven of witches certainly doesn't make her feel any better... von Beaton, M. C.

M.C. Beaton (1936-2019) was the author of both the Agatha Raisin and Hamish Macbeth series, as well as numerous Regency romances. Her books have been translated into seventeen languages and have sold more than twenty-one million copies worldwide. She is consistently the most borrowed UK adult author in British libraries, and her Agatha Raisin books have been turned into a TV series on Sky.