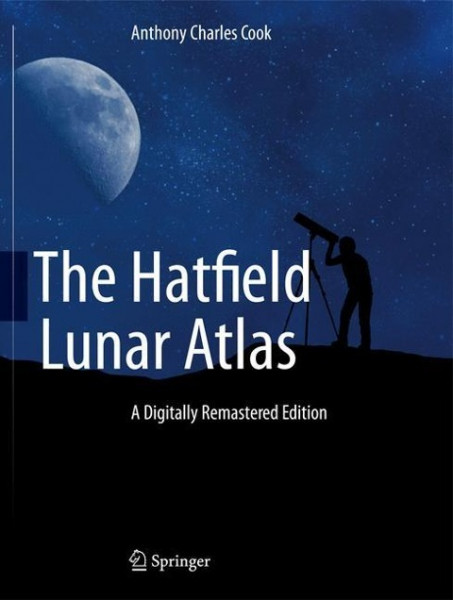 "The Hatfield Lunar Atlas" has become an amateur lunar observer's bible since it was first published in 1968. A major update of the atlas was made in 1998, using the same wonderful photographs that Commander Henry Hatfield made with his purpose-built 12-inch (300 mm) telescope, but bringing the lunar nomenclature up to date and changing the units from Imperial to S.I. metric This edition is important since the fact is that modern telescope optics, digital imaging equipment and computer enhancement can easily surpass what was achieved with Henry Hatfield's 12-inch telescope and a film camera. This limits the usefulness of the original atlas to visual observing or imaging rather small amateur telescopes. The new, digitally re-mastered edition vastly improves the clarity and definition of the original photographs - significantly beyond the resolution limits of the photographic grains present in earlier atlas versions - while preserving the layout and style of the original publications. This has been achieved by merging computer-visualized Earth-based views of the lunar surface, derived from NASA's Lunar Reconnaissance Orbiter data, with scanned copies of Commander Hatfield's photographic plates, using the author's own software. The results is a "The Hatfield Lunar Atlas" for 21st century amateur telescopes up to and beyond 12-inch aperture. von Cook, Anthony

Anthony Cook, PhD, FBIS, FRAS, is both an amateur astronomer and professional lunar and planetary cartographer. He has worked with many leading planetary cartography research groups in the UK, Germany, and the United States. He produced a planet-wide digital elevation model (DEM) of the Moon in the year 2000, and this was used by the European Space Agecny to guide its SMART-1 spacecrafy down to a precise impact. Six previously unknown impact basins larger than 300 km across were discovered using this lunar DEM.Presently he is at the Institute of Mathematics and Physics, Aberystwyth University, in the UK. He is Assistant Director of the British Astronomical Lunar Section, and coordinates the Transient Lunar Phenomena observing program alongside a similar program for the Association of Lunar and Planetary Observers. He has had Digital Planetary Cartography papers published in referred journals: "Planetary and Space Science," and "The Journal of Geophysical Research."