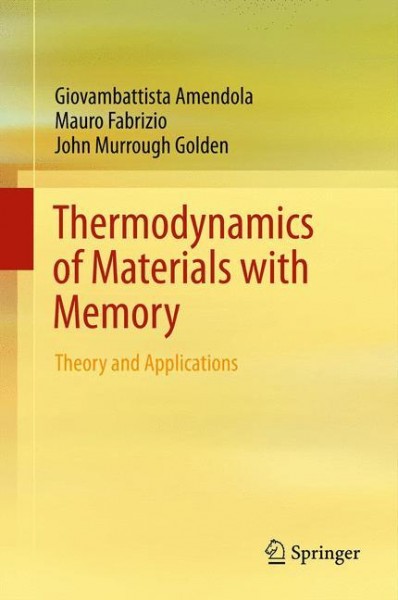 Thermodynamics of Materials with Memory

Thermodynamics of Materials with Memory
Theory and Applications

This is a work in four parts, dealing with the mechanics and thermodynamics of materials with memory, including properties of the dynamical equations which describe their evolution in time under varying loads. The first part is an introduction to Continuum Mechanics with sections dealing with classical Fluid Mechanics and Elasticity, linear and non-linear. The second part is devoted to Continuum Thermodynamics, which is used to derive constitutive equations of materials with memory, including viscoelastic solids, fluids, heat conductors and some examples of non-simple materials. In part three, free energies for materials with linear memory constitutive relations are comprehensively explored. The new concept of a minimal state is also introduced. Formulae derived over the last decade for the minimum and related free energies are discussed in depth. Also, a new single integral free energy which is a functional of the minimal state is analyzed in detail. Finally, free energies for examples of non-simple materials are considered. In the final part, existence, uniqueness and stability results are presented for the integrodifferential equations describing the dynamical evolution of viscoelastic materials. A new approach to these topics, based on the use of minimal states rather than histories, is discussed in detail. There are also chapters on the controllability of thermoelastic systems with memory, the Saint-Venant problem for viscoelastic materials and on the theory of inverse problems. von Amendola, Giovambattista und Fabrizio, Mauro und Golden, John Murrough