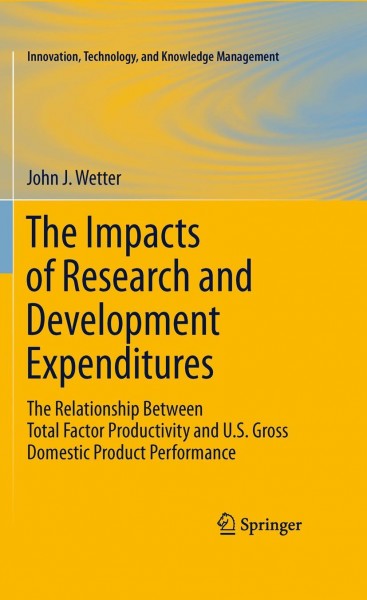 The Impacts of Research and Development Expenditures

The Impacts of Research and Development Expenditures
The Relationship Between Total Factor Productivity and U.S. Gross Domestic Product Performance

The research underlying this volume was designed to test the theory of Total Factor Productivity (TFP) in contemporary context. Developed by Nobel Prize-winning economist, Robert Solow, in the 1950s, TFP has been applied by many economists to investigate the relationships among capital, labor, and economic performance. In this analysis, John Wetter presents the hypothesis that technological investment drives growth and performance of the U.S. economy. The study addresses four key questions: 1. Is there a relationship between Total Factor Productivity and Gross National Product? 2. Is there a relationship between Total Factor Productivity and Research & Development expenditures? 3. Is there a relationship between Research & Development expenditures and Gross Domestic Product? 4. Can the relationship in research question #1 be explained by other factors? Is there any potential non-spuriousness (mediation) implication to the relationship? Synthesizing the literature from related fields, including macroeconomics, technology transfer, and innovation, and applying rigorous methodology, Wetter demonstrates that Total Factor Productivity is positively related to Gross Domestic Product and is mediated by Research & Development. In addition, he reveals that the lag time between R&D spending and GDP growth averages eleven years, which suggests that long-term planning is essential to maximizing the benefits of R&D. Wetter considers the implications for policymaking and industry leadership, including such timely issues as the effects of the 2009 U.S. stimulus program. von Wetter, John J.

John J. Wetter, PhD, PMP is Senior Project Manager with the Xerox Global Services division of Xerox Corporation and is a practitioner of Six Sigma methodologies. He received his doctorate from the George Washington University in Washington DC. Previously, he received his BS and MBA degrees from the University of Scranton. He is currently Adjunct Assistant Professor at the University of Maryland University College, and he previously served as Adjunct Professor at the University of Vermont. His research interests include technology management, project management, Six Sigma, and technological disruption. His publications include chapters in Carayannis and Chanaron, eds., Leading and Managing Creators, Inventors, and Innovators (Praeger, 2006) and Shavinina, ed., The International Handbook on Innovation (Elsevier, 2003).