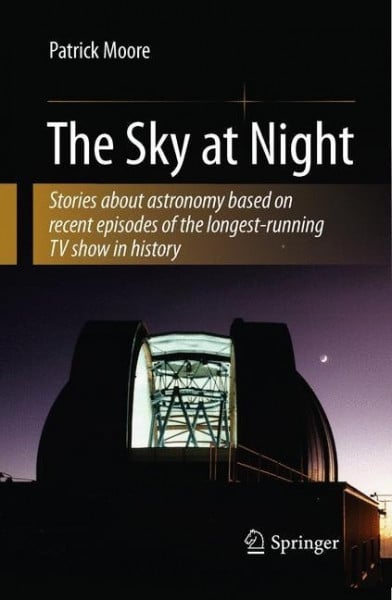 The Sky at Night

The Sky at Night

When I became the producer of the Sky at Night in 2002, I was given some friendly advice: "It's a quiet little programme, not much happens in astronomy." How wrong they were! It's been a hectic and enthralling time ever since:, with missions arriving at distant planets; new discoveries in our Universe; and leaps in technology, which mean amateurs can take pictures as good as the Hubble Space Telescope. What a privilege it is to work on a programme with such a huge heritage! I am constantly amazed looking back at the flotilla of excellent programmes which have gone out over the past five decades. The Sky at Night has always been at the sharp end of science broadcasting, whether it's showing the first view from the far side of the Moon or pictures of a new comet which has swept into our sky. Viewers can depend on Sir Patrick to tell them the latest news and explain what it means. It's an outstanding achievement and Sir Patrick still holds the world record for being the same presenter on the longest running TV programme. Our guests love coming down to Farthings, Sir Patrick's home. For them, me- ing him is like meeting their astronomical hero. Over the past five decades, the Sky at Night has managed to talk to the space scientists and astronomers making the landmark discoveries. No matter how busy they are, they make room for Sir Patrick. von Moore, Patrick

Sir Patrick Moore is one of the world's leading popularisers of astronomy. He has written more than 100 books and presented his BBC TV program The Sky at Night every four weeks since 1957, making it the world's longest running television program of any kind. While still in school, he became a member of the British Astronomical Association (BAA) and was later appointed director of Brockhurst Observatory. He served as director of the Armagh Planetarium between 1965 and 1968. He is a fellow of the Royal Astronomical Society (and a Jackson Gwillt medallist), a member of the International Astronomical Union, a holder of the Goodacre medal, and former president and current life vice-president of the BAA. A minor planet (# 2602) has been named after him. He was knighted in November 2000. He was also made a Fellow of the Royal Society. As the presenter of the record breaking The Sky at Night series, Patrick was awarded a BAFTA in 2000. The most important research Patrick has carried out has been about the Moon. He is credited with discovering the Mare Orientale. He did this with his "traditional" 12 1/2 inch reflector, which still sits proudly in his front garden. His maps of the Moon were among those used by the Russians in 1959 to correlate the first Lunik 3 pictures of the far side. He was also at NASA for the lunar mapping prior to the Apollo missions. Chris Lintott, the co-star of the latest episodes of Sky at Night, has a massive fan base that derives equally from The Sky at Night and from his paradigm-shifting astronomy website Galaxy Zoo, which has some 150,000 members.