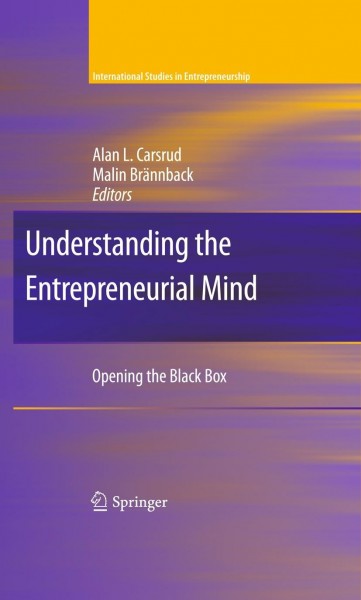 Interest in the functioning of the human mind can certainly be traced to Plato and Aristotle who often dealt with issues of perceptions and motivations. While the Greeks may have contemplated the human condition, the modern study of the human mind can be traced back to Sigmund Freud (1900) and the psychoanalytic movement. He began the exploration of both conscious and unconscious factors that propelled humans to engage in a variety of behaviors. While Freud's focus may have been on repressed sexuality our focus in this volume lies elsewhere. We are concerned herein with the expression of the cognitions, motivations, passions, intentions, perceptions, and emotions associated with entrepreneurial behaviors. We are attempting in this volume to expand on the work of why entrepreneurs think d- ferently from other people (Baron, 1998, 2004). During the decade of the 1990s the eld of entrepreneurship research seemingly abandoned the study of the entrepreneur. This was the result of earlier research not being able to demonstrate some unique entrepreneurial personality, trait, or char- teristic (Brockhaus and Horwitz, 1986). It was both a naïve and simplistic search for the "holy grail" of what made entrepreneurs the way they are. However, many of the researchers in this volume have never gave up the belief that a better und- standing of the mind of the entrepreneur would give us a better understanding of the processes that lead to the creation of new ventures. von Carsrud, Alan L. und Brännback, Mali