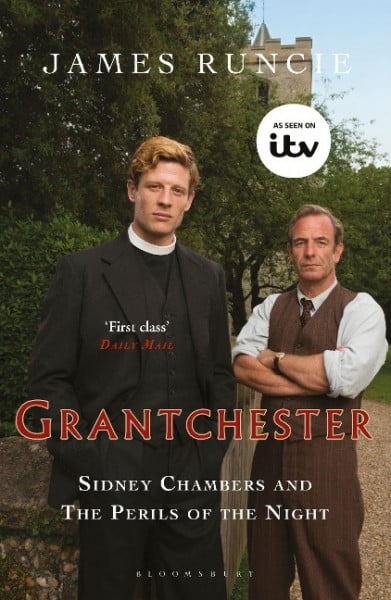 Sidney Chambers and The Perils of the Night

Sidney Chambers and The Perils of the Night
Grantchester Mysteries 2

Grantchester Mysteries 2 _______________ 'Runcie is emerging as Grantchester's answer to Alexander McCall Smith. The book brings a dollop of Midsomer Murders to the Church of England, together with a literate charm of its own: civilized entertainment, with dog-collars' - Spectator 'A perfect accompaniment to a sunny afternoon, a hammock and a glass of Pimm's' - Guardian 'Totally English, beautifully written, perfectly in period and wryly funny. More, please!' - Leslie Geddes Brown, Country Life _______________ Now a major, prime-time six-part series Grantchester for ITV 1955. Canon Sidney Chambers, loveable priest and part-time detective, is back. Accompanied by his faithful Labrador, Dickens, and the increasingly exasperated Inspector Geordie Keating, Sidney is called to investigate the unexpected fall of a Cambridge don from the roof of King's College Chapel, a case of arson at a glamour photographer's studio and the poisoning of Zafar Ali, Grantchester's finest spin bowler. Alongside his sleuthing, Sidney has other problems. Can he decide between his dear friend, the glamorous socialite Amanda Kendall and Hildegard Staunton, the beguiling German widow? To make up his mind Sidney takes a trip abroad, only to find himself trapped in a web of international espionage just as the Berlin Wall is going up. _______________ 'The series has a charming quaintness and deftly turning plot twists but what renders it unique as detective fiction is its overtly Christian content' - Arifa Akbar, Independent 'It takes a first-class writer to put together a convincing storyline for such unlikely circumstances. James Runcie does it admirably . He is a good man in an imperfect world and we should welcome him to the ranks of classic detectives' - Daily Mail von Runcie, James