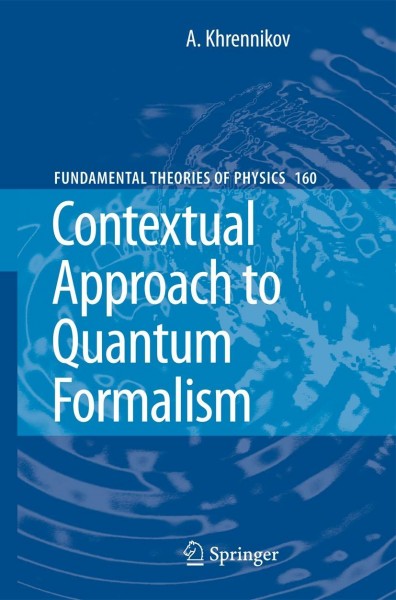 The aim of this book is to show that the probabilistic formalisms of classical statistical mechanics and quantum mechanics can be unified on the basis of a general contextual probabilistic model. By taking into account the dependence of (classical) probabilities on contexts (i.e. complexes of physical conditions), one can reproduce all distinct features of quantum probabilities such as the interference of probabilities and the violation of Bell's inequality. Moreover, by starting with a formula for the interference of probabilities (which generalizes the well known classical formula of total probability), one can construct the representation of contextual probabilities by complex probability amplitudes or, in the abstract formalism, by normalized vectors of the complex Hilbert space or its hyperbolic generalization. Thus the Hilbert space representation of probabilities can be naturally derived from classical probabilistic assumptions. An important chapter of the book critically reviews known no-go theorems: the impossibility to establish a finer description of micro-phenomena than provided by quantum mechanics; and, in particular, the commonly accepted consequences of Bell's theorem (including quantum non-locality). Also, possible applications of the contextual probabilistic model and its quantum-like representation in complex Hilbert spaces in other fields (e.g. in cognitive science and psychology) are discussed. von Khrennikov, Andrei

Prof. Andrei Khrennikov is the director of International center for mathematical modeling in physics, engineering and cognitive science, University of Växjö, Sweden, which was created 8 years ago to perform interdisciplinary research.Two series of conferences on quantum foundations (especially probabilistic aspects) were established on the basis of this center: "Foundations of Probability and Physics" and "Quantum Theory: Reconsideration of Foundations". These series became well known in the quantum community (including quantum information groups). Hundreds of theoreticians (physicists and mathematicians), experimenters and even philosophers participated in these conferences presenting a huge diversity of views to quantum foundations. Contacts with these people played the crucial role in creation of the present book. Prof. Andrei Khrennikov published about 300 papers in internationally recognized journals in mathematics, physics and biology and 9 monographs - in p-adic and non-Archimedean analysis with applications to mathematical physics and cognitive sciences as well as foundations of probabilityu theory.