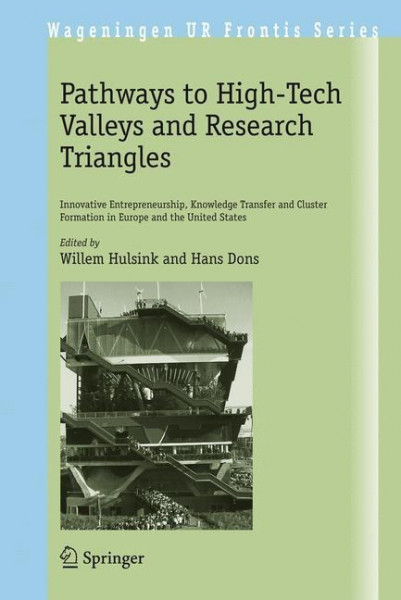 Pathways to High-tech Valleys and Research Triangles
Innovative Entrepreneurship, Knowledge Transfer and Cluster Formation in Europe and the United States

About the book The contents of most of the chapters included in this volume were originally presented and discussed during the academic workshop 'High-tech Valleys and Research Triangles in the East of the Netherlands and elsewhere', held on 30 November and 1 December 2005 at the Wageningen International Congress Centre (WICC) in the Netherlands. At that time we had an informal agreement with Rob Bogers, series editor of the Wageningen UR Frontis book series that, if the quality and quantity of the talks and papers at the seminar would be sufficient and if there was willingness among the (potential) authors, an edited book volume based upon the results of the workshop would be a possibility. After the workshop, when we had a critical mass of ten chapters and a dedicated group of committed authors, the book project was given the green light. As editors we realized that there were still a couple of topics and themes missing, and when we had found colleagues for these four additional chapters that needed to be written, our Frontis book was on the roll! Although most of the time it was great fun, the whole process of writing, reviewing, rewriting, editing and proofreading took a lot of time; much more time than we originally had foreseen. We would like to thank all authors of the fourteen chapters of this book for their excellent contributions. von Hulsink, Willem