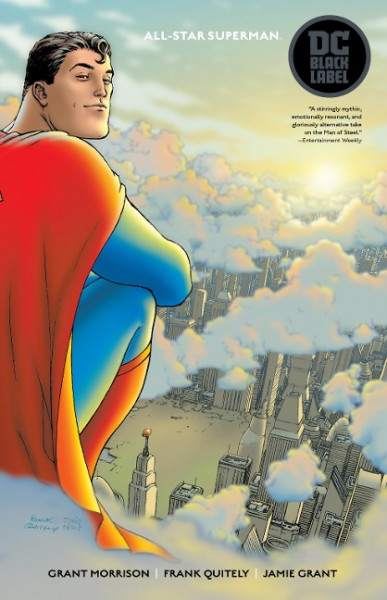 Eisner Award Winner: Best New SeriesThe Man of Steel goes toe-to-toe with Bizarro, his oddball twin, and the new character Zibarro, also from the Bizarro planet. And Superman faces the final revenge of Lex Luthor in the form of his own death! All-Star Superman is a spectacular reimagining of the Superman mythos, from the Man of Steel's origin to his greatest foes and beyond.Combining their singular talents to create a new and brilliant vision of the Man of Steel, comics storytellers Grant Morrison and Frank Quitely are reunited with their WE3 collaborator Jamie Grant for one of the greatest Superman stories ever imagined. Collects All-Star Superman #1-12.Collection features classic DC characters in compelling, standalone stories written and illustrated by world-class authors and artists. von Morrison, Grant

Writer Grant Morrison is known for his innovative work on comics from the graphic novel Arkham Asylum to acclaimed runs on Animal Man and Doom Patrol, as well as his subversive creator-owned titles such as The Invisibles, Seaguy, and WE3. Grant has also written best-selling runs on JLA, Seven Soldiers of Victory, and New X-Men, and helped to reinvent the DC Universe in The Multiversity, All Star Superman, 52, Batman, Batman & Robin and Batman, Inc.Frank Quitely was born in Glasgow in 1968. Some of his most notable work has been for DC Comics/Vertigo, including Flex Mentallo, Batman: The Scottish Connection, The Kingdom: Offspring, JLA: Earth 2, The Invisibles, Transmetropolitan, The Authority, The Sandman: Endless Nights, WE3, All-Star Superman and Batman & Robin. For Marvel Comics, he's worked on New X-Men with frequent collaborator Grant Morrison. He is also a sought-after covers artist, having drawn for Negative Burn, Judge Dredd Megazine, Classic 2000 AD, Jonah Hex, Books of Magick: Life During Wartime, Bite Club, American Virgin and All-Star Batman. He lives in Glasgow with his wife and three children.