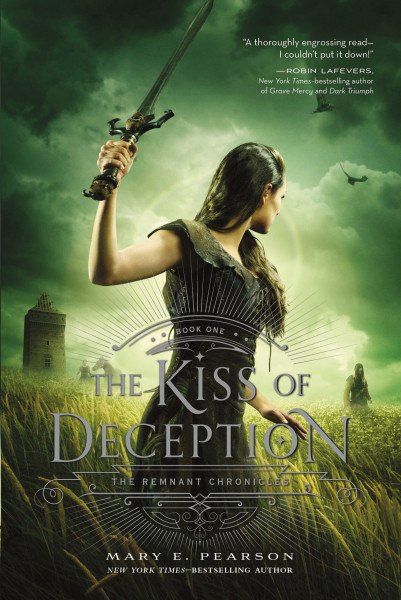 The Kiss of Deception

The Kiss of Deception
The Remnant Chronicles 01

The first book of the New York Times bestselling Remnant Chronicles."Fantastical." -USA TodayShe flees on her wedding day.She steals ancient documents from the Chancellor's secret collection.She is pursued by bounty hunters sent by her own father.She is Princess Lia, seventeen, First Daughter of the House of Morrighan.The Kingdom of Morrighan is steeped in tradition and the stories of a bygone world, but some traditions Lia can't abide. Like having to marry someone she's never met to secure a political alliance. Fed up and ready for a new life, Lia escapes to a distant village on the morning of her wedding. She settles in among the common folk, intrigued when two mysterious and handsome strangers arrive-and unaware that one is the jilted prince and the other an assassin sent to kill her. Deceptions swirl and Lia finds herself on the brink of unlocking perilous secrets-secrets that may unravel her world-even as she feels herself falling in love.The Kiss of Deception is the first book in Mary E. Pearson's New York Times bestselling young adult fantasy series Remnant Chronicles. The adventure continues in the New York Times bestseller, The Heart of Betrayal, and comes to an epic conclusion in The Beauty of Darkness.Praise for The Kiss of Deception:"A deeply satisfying, intricately plotted fantasy where no one-no one-is quite what they seem. . . . A thoroughly engrossing read-I couldn't put it down!" -Robin LaFevers, New York Times-bestselling author of Grave Mercy and Dark Triumph"A sumptuous fantasy." -Chicago Tribune "This is the kind of story I love-a heart-pounding tale of magic and murder, betrayal and romance set in a richly imagined fantasy landscape." -Cindy Williams Chima, New York Times-bestselling author of the Seven Realms and the Heir Chronicles"Extraordinary . . . masterfully crafted." -Publishers Weekly, starred review"The Kiss of Deception has it all--beautiful writing, heart-pounding suspense, a fiery princess, and an epic romance that'll make you swoon. This is definitely one of my favorite reads of the year!" -Alyson Noël, #1 New York Times-bestselling author of The Immortals"In The Kiss of Deception, a new realm is masterfully created, featuring court intrigue, feuding nations, breathtaking landscapes, and the gift of sight. Fans of the Game of Thrones series will enjoy the magic and fantasy in this timeless dystopian world." -VOYA"Gripping, urgent, and highly appealing." -School Library Journal"Pearson (the Jenna Fox Chronicles) is off to an extraordinary start with her fantasy series, the Remnant Chronicles, creating an alluring world and romance that's ideal for fans of Kristin Cashore and Megan Whalen Turner." -Publishers Weekly"Pearson offers readers a wonderfully full-bodied story: harrowing, romantic, and full of myth and memory, fate and hope. . . . This has the sweep of an epic tale, told with some twists." -Booklist, starred review"A marvelous new fantasy series that is sure to find an audience with devotees of Suzanne Collins's The Hunger Games and John Flanagan's Ranger's Apprentice books (Philomel). Romance, adventure, mysticism--this book has it all and it just may be the next YA blockbuster." -School Library Journal, starred review von Pearson, Mary E.