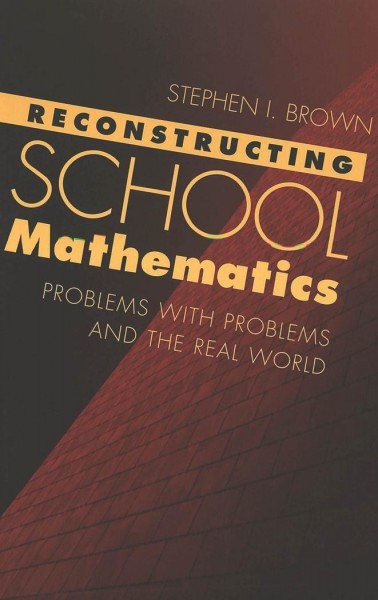 Reconstructing School Mathematics
Problems with Problems and the Real World

This book offers a critique of two major themes of the modern reform movement in mathematics education: problem solving and the applications of mathematics to the «real world». In examining the educational fallacy inherent in the impulse to move unflinchingly from «problem» to «problem solving», Stephen I. Brown demonstrates the potential of mathematical reflection to reveal aspects of self and society that have been suppressed in curriculum. He then argues that in seeking connections between mathematics and the «real world», we have tended to reduce their relationship to one of modeling. Furthermore, in constructing what is «real» in an overly concrete way, we have lost sight of the wonder of what is «real» in both mathematics and the world. Brown explores alternative text formats, including that of the novel and the Talmud, as vehicles to rejuvenate the educational potential of problems and of real world connections. von Brown, Stephen I.

The Author: Stephen I. Brown is Professor Emeritus of Education at the State University of New York at Buffalo. Recipient of a Dewey Senior Fellowship, he received his doctorate from the Harvard Graduate School of Education. He has published widely in the areas of number theory, problem posing and solving, mathematics education, and the philosophy of education. Presently an associate editor for Humanistic Mathematics Network, he has served on the review board of Educational Theory and on the editorial boards of For the Learning of Mathematics, The Mathematics Teacher, and The Harvard Educational Review.