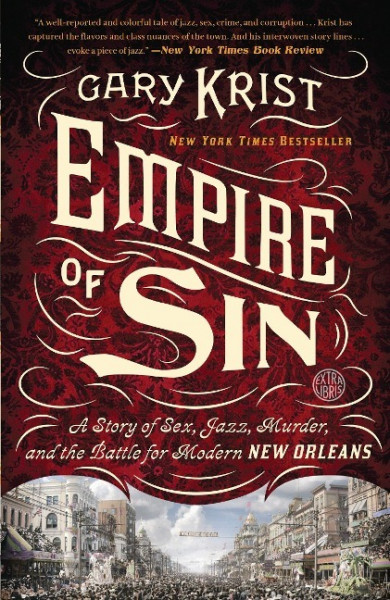 Empire of Sin: A Story of Sex, Jazz, Murder, and the Battle for Modern New Orleans

Empire of Sin: A Story of Sex, Jazz, Murder, and the Battle for Modern New Orleans

From bestselling author Gary Krist, a vibrant and immersive account of New Orleans' other civil war, at a time when commercialized vice, jazz culture, and endemic crime defined the battlegrounds of the Crescent City Empire of Sin re-creates the remarkable story of New Orleans' thirty-years war against itself, pitting the city's elite "better half" against its powerful and long-entrenched underworld of vice, perversity, and crime. This early-20th-century battle centers on one man: Tom Anderson, the undisputed czar of the city's Storyville vice district, who fights desperately to keep his empire intact as it faces onslaughts from all sides. Surrounding him are the stories of flamboyant prostitutes, crusading moral reformers, dissolute jazzmen, ruthless Mafiosi, venal politicians, and one extremely violent serial killer, all battling for primacy in a wild and wicked city unlike any other in the world. von Krist, Gary

GARY KRIST has written for the New York Times, Esquire, Salon, the Washington Post Book World, and elsewhere. He is the author of the bestselling Empire of Sin, City of Scoundrels, and the acclaimed The White Cascade, as well as several works of fiction. He has been the recipient of the Stephen Crane Award, the Sue Kaufman Prize from the American Academy of Arts and Letters, a Lowell Thomas Gold Medal for Travel Journalism, and a fellowship from the National Endowment for the Arts.