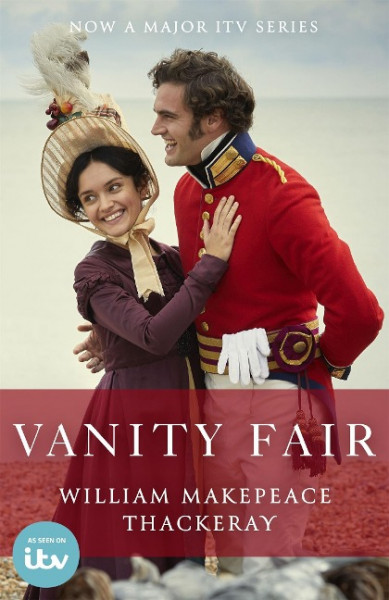 The classic novel of 'villainy, crime, merriment, lovemaking, jilting, laughing, cheating, fighting and dancing', soon to be a major new ITV series from the producers of Poldark, Victoria and And Then There Were None.William Makepeace Thackeray's witty literary classic Vanity Fair is set against the backdrop of the Napoleonic Wars, and follows anti-heroine and ruthless social climber Becky Sharp as she attempts to claw her way out of poverty and scale the heights of English Society. Her story takes her all the way to the court of King George IV, via the Battle of Waterloo, breaking heart and fortunes as she goes.ITV's new adaptation of will be one of the biggest drama series of 2018: its script comes from BAFTA-award-winning writer Gwyneth Hughes, the series is co-produced by leading production companies Mammoth Screen and Amazon Studios, and Olivia Cooke - star of Steven Spielberg's hit blockbuster Ready Player One - plays Thackeray's timeless heroine Becky Sharp.Read the book before you see the series, then devour it all over again. von Thackeray, William Makepeace

William Makepeace Thackeray was born in Calcutta in 1811. On his way to England from India, the small Thackeray saw Napoleon on St Helena. In 1837, Thackeray came to London and became a regular contributor to Fraser's Magazine. From 1842 to 1851, he was on the staff of Punch, and this was when he wrote Vanity Fair, the work which placed him in the first rank of novelists. He completed it when he was thirty-seven.In 1857, Thackeray stood unsuccessfully as a parliamentary candidate for Oxford. In 1859 he took on the editorship of the Cornhill Magazine. He resigned the position in 1862 because kindliness and sensitivity of spirit made it difficult for him to turn down contributors.Thackeray drew on his own experiences for his writing. He had a great weakness for gambling, a great desire for worldly success, and over his life hung the tragic illness of his wife Isabella, with whom he had hree daughters, one dying in infancy.Thackeray died December 24, 1863. He was buried in Kensal Green, and a bust by Marochetti was put up to his memory in Westminster Abbey.