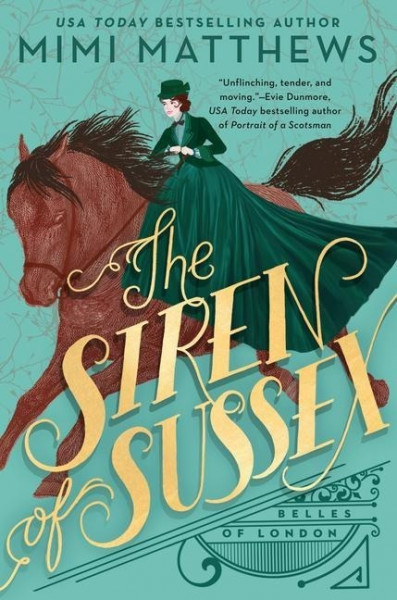 The Siren of Sussex

The Siren of Sussex

London's daring new equestrienne finds love and an unexpected ally in her fight for independence in the strong arms of Victorian society's most sought after and devastatingly handsome half-Indian tailor.Evelyn Maltravers knows exactly how little she's worth on the marriage mart. As an incurable bluestocking from a family tumbling swiftly toward ruin, she knows she'll never make a match in a ballroom. Her only hope is to distinguish herself by making the biggest splash in the one sphere she excels: on horseback. In haute couture. But to truly capture London's attention she'll need a tailor who's not afraid to take risks with his designs-and with his heart.Half-Indian dressmaker Ahmad Malik has always had a talent for making women beautiful, inching his way toward recognition by designing riding habits for Rotten Row's infamous Pretty Horsebreakers-but no one compares to Evelyn. Her unbridled spirit enchants him, awakening a depth of feeling he never thought possible.But pushing boundaries comes at a cost and not everyone is pleased to welcome Evelyn and Ahmad into fashionable society. With obstacles spanning between them, the indomitable pair must decide which hurdles they can jump and what matters most: making their mark or following their hearts?Story Locale: Victorian LondonSeries Overview: A daring group of unconventional women ride boldly across Victorian London to find independence and love. von Matthews, Mimi