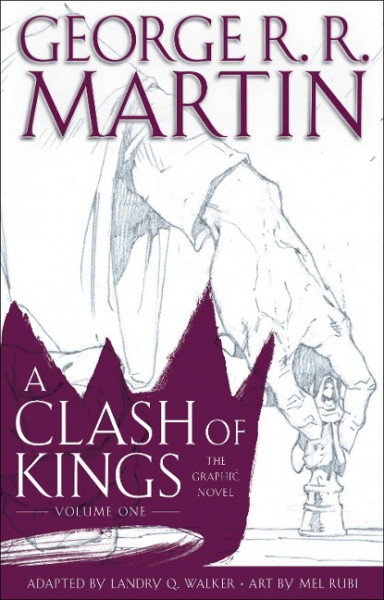 A Clash of Kings: The Graphic Novel: Volume One

A Clash of Kings: The Graphic Novel: Volume One

The first volume of a four-part, full-color graphic novel adaptation of the second book in George R. R. Martin's landmark Song of Ice and Fire series, the inspiration for HBO's Game of Thrones. The four-part graphic novel adaptation of A Game of Thrones proved that George R. R. Martin's A Song of Ice and Fire has the power to enchant in any medium. Now the story continues as New York Times bestselling author Landry Q. Walker and illustrator Mel Rubi introduce a thrilling new series based on the second book in the landmark saga. Time is out of joint. The summer of peace and plenty, ten years long, is drawing to a close, and the harsh, chill winter approaches like an angry beast. Two great leaders-Lord Eddard Stark and King Robert Baratheon-who held sway over an age of enforced peace are dead, victims of royal treachery. Now, from the ancient citadel of Dragonstone to the forbidding walls of Winterfell, chaos reigns as pretenders to the Iron Throne of the Seven Kingdoms prepare to stake their claims through tempest, turmoil, and war. As a prophecy of doom cuts across the sky-a comet the color of blood and flame-six factions struggle for control of a divided land. Eddard's son Robb has declared himself King in the North. In the south, Joffrey, the heir apparent, rules in name only, victim of the scheming courtiers who teem over King's Landing. Robert Baratheon's two brothers each seek his own dominion, while a disfavored house turns once more to conquest. And a continent away, an exiled queen, the Mother of Dragons, risks everything to lead her precious brood across a hard, hot desert to win back the crown that is rightfully hers. Against a backdrop of incest and fratricide, alchemy and murder, the price of glory may be measured in blood. And the spoils of victory may just go to the men and women possessed of the coldest steel . . . and the coldest hearts. For when rulers clash, all the land feels the tremors. von Martin, George R. R.

George R. R. Martin is the #1 New York Times bestselling author of many novels, including those of the acclaimed series A Song of Ice and Fire--A Game of Thrones, A Clash of Kings, A Storm of Swords, A Feast for Crows, and A Dance with Dragons-- as well as Tuf Voyaging, Fevre Dream, The Armageddon Rag, Dying of the Light, Windhaven (with Lisa Tuttle), and Dreamsongs Volumes I and II. He is also the creator of The Lands of Ice and Fire, a collection of maps featuring original artwork from illustrator and cartographer Jonathan Roberts, and The World of Ice & Fire, with Elio M. Garcia, Jr., and Linda Antonsson. As a writer-producer, he has worked on The Twilight Zone, Beauty and the Beast, and various feature films and pilots that were never made. He lives with the lovely Parris in Santa Fe, New Mexico.Landry Q. Walker is a New York Times bestselling author of comics and books. He lives with his cats and his wife and he spends his days pushing buttons randomly on a keyboard until stories somehow happen. Mel Rubi has been a professional artist since 1993, and enjoys challenging himself on every difficult task he takes on. He loves playing chess and is a family man.