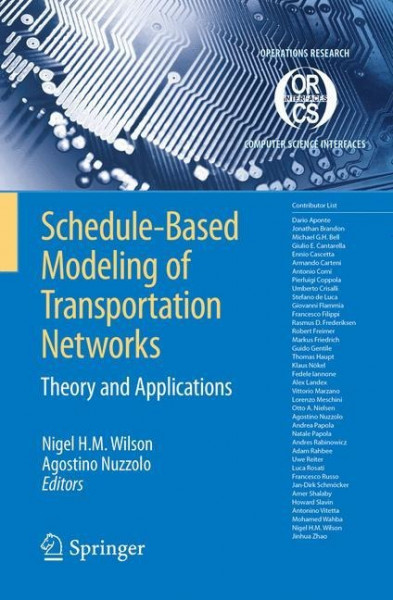 "Schedule-Based Modeling of Transportation Networks: Theory and Applications" follows the book Schedule-Based Dynamic Transit Modeling, published in this series in 2004, recognizing the critical role that schedules play in transportation systems.Conceived for the simulation of transit systems, in the last few years the schedule-based approach has been expanded and applied to operational planning of other transportation schedule services besides mass transit, e.g. freight transport. This innovative approach allows forecasting the evolution over time of the on-board loads on the services and their time-varying performance, using credible user behavioral hypotheses. It opens new frontiers in transportation modeling to support network design, timetable setting, and investigation of congestion effects, as well as the assessment of such new technologies, such as users system information (ITS technologies). von Wilson, Nigel H. M. und Nuzzolo, Agostino

Nigel H.M. Wilson is considered one of the leading researchers in the area of mass transit and Agostino Nuzzolo is very much a rising achiever in transportation research. They have attracted some well-established researchers to participate in the topical conference from which this volume is drawn.