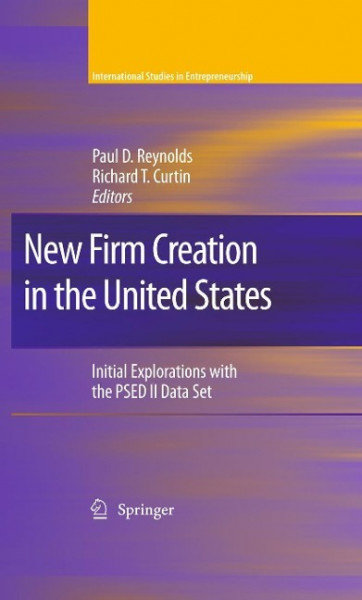 This research program began in 1993. The idea of developing representative samples of those active in the business creation process, now called nascent entrepreneurs, developed from the success of using regional characteristics to 1 predict variations in new firm birth rates in six countries. The initial purpose was to determine those external factors that encouraged individuals to initiate the business creation process and become, as they are now called, nascent entrepreneurs. The research procedures, mainly the critical aspects of the scre- ing procedures, were developed with the Survey Research Laboratory at the University of Wisconsin in Madison to complete the Wisconsin Entrepreneurial 2 Climate Study. Support for an initial test with a national sample was provided by the Institute for Social Research at the University of Michigan. Richard Curtin became involved with the incorporation of the screening module as part 3 of the Survey of Consumers in October and November in 1993. The success of these efforts in providing a detailed description of the ent- preneurial process based on representative samples led to substantial interest among entrepreneurial scholars. A founding team of Nancy Carter, William Gartner, and Paul Reynolds was able to organize the Entrepreneurial Research Consortium (ERC), a collaborative network of 34 research units that shared the financial cost and sweat equity required to implement the first national project, 4 PSED I. von Reynolds, Paul D.