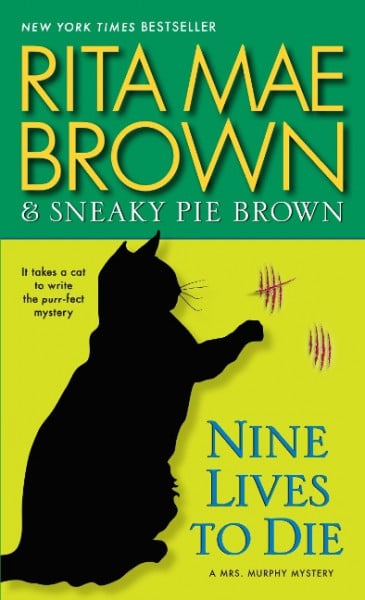 NATIONAL BESTSELLER • NAMED ONE OF THE BEST BOOKS OF THE YEAR BY SUSPENSE MAGAZINERita Mae Brown and her feline co-author Sneaky Pie Brown return with a mystery starring Mary Minor "Harry" Haristeen, intrepid kitty sleuths Mrs. Murphy and Pewter, and Tee Tucker, the ever-faithful crime-solving corgi. This time around, Harry and her animal friends track a killer whose trail has gone as cold as the weather in December. NINE LIVES TO DIE Winter has come to Crozet, Virginia, bringing with it a fresh blanket of snow. Harry and her husband, Fair, are hip deep in their usual end-of-the-year activities: distributing food to needy residents, and shopping for outfits for the Silver Linings youth organization's annual fundraising gala. But buried beneath the white stuff are dark secrets from Crozet's past-and Harry and her posse of pet detectives are determined to sniff them out. Two Silver Linings mentors have been found dead in suspicious circumstances. If that weren't enough to chill the bones of the locals, a pair of severed human fingers has turned up in a pencil jar in the bookkeeper's office at St. Cyril's church. What does this grisly display have to do with the mysterious disappearance of Harry's voluptuous high school Latin teacher, a quarter of a century ago? Maybe nothing. But when the animals make another gruesome discovery in the woods behind Harry's farm, it becomes clear that terrible crimes have been committed in Crozet-and somebody's gone to great lengths to cover them up. It's time to stop shoveling snow and start digging for clues. The truth will be revealed. A cold case will be solved. And a twenty-five-year-old love triangle is about to get untangled. The weather outside may be frightful, but Harry and her four-legged friends refuse to be spooked off the case.Praise for Nine Lives to Die "Witty and entertaining . . . a recipe for continued success and an engaging read."-Richmond Times-Dispatch "The unabashed loves of [Rita Mae Brown's] life . . . are infectious. Perhaps because they are so clearly heartfelt, it's easy to be swept up in the glory of her passions."-New York Journal of Books"Murder and mayhem are the order of the day in bestseller [Rita Mae] Brown's well-plotted twenty-second Mrs. Murphy mystery. . . . Brown's idyllic world, with its Christian values, talking animals, and sympathetic middle-aged pet owners, has understandably struck a chord with many readers."-Publishers Weekly "Rita Mae Brown, along with . . . Sneaky Pie, have made Harry Harristeen and her feline companion, Mrs. Murphy, household names."-Library JournalPraise for the Mrs. Murphy mysteries "As feline collaborators go, you couldn't ask for better than Sneaky Pie Brown."-The New York Times Book Review von Brown, Rita Mae

Rita Mae Brown is the bestselling author of the Sneaky Pie Brown series; the Sister Jane series; A Nose for Justice and Murder Unleashed; Rubyfruit Jungle; In Her Day; and Six of One, as well as several other novels. An Emmy-nominated screenwriter and a poet, Brown lives in Afton, Virginia. Sneaky Pie Brown, a tiger cat born somewhere in Albemarle County, Virginia, was discovered by Rita Mae Brown at her local SPCA. They have collaborated on twenty-one previous Mrs. Murphy mysteries-in addition to Sneaky Pie's Cookbook for Mystery Lovers and Sneaky Pie for President.