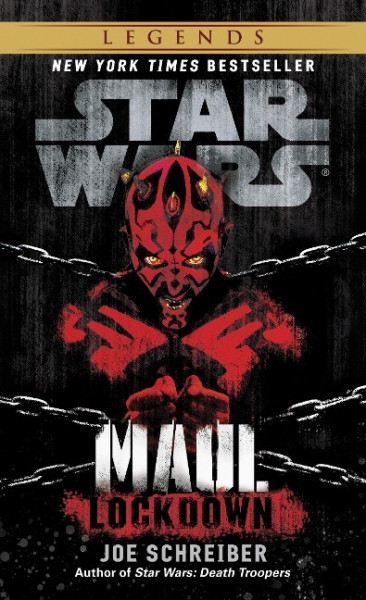 NEW YORK TIMES BESTSELLERSet before the events of Star Wars: Episode I The Phantom Menace, this new novel is a thrilling follow-up to Star Wars: Darth Plagueis. It's kill or be killed in the space penitentiary that houses the galaxy's worst criminals, where convicts face off in gladiatorial combat while an underworld gambling empire reaps the profits of the illicit blood sport. But the newest contender in this savage arena, as demonic to behold as he is deadly to challenge, is fighting for more than just survival. His do-or-die mission, for the dark masters he serves, is to capture the ultimate weapon: an object that will enable the Sith to conquer the galaxy. Sith lords Darth Plagueis and Darth Sidious are determined to possess the prize. And one of the power-hungry duo has his own treacherous plans for it. But first, their fearsome apprentice must take on a bloodthirsty prison warden, a cannibal gang, cutthroat crime lord Jabba the Hutt, and an unspeakable alien horror. No one else could brave such a gauntlet of death and live. But no one else is the dreaded dark-side disciple known as Darth Maul.Praise for Lockdown "Schreiber . . . was a great choice for this novel, imbuing the story with a dark, foreboding tone while never quite stepping into the horror territories that Death Troopers and Red Harvest took us."-Jedi News "Fans of the dark side should rejoice. Lockdown delivers a can't-put-this-down tale of scum and villainy."-Club Jade "[Lockdown is] an action-packed ride that spins one entertaining chapter after another. The multiple layers of story keeps readers guessing what will happen next and just who will live and who will die. . . . It certainly adds to the character of Darth Maul while matching [Darth] Plagueis's complexity with sheer fun. . . . Five out of five metal bikinis."-Roqoo Depot "Somehow, Schreiber is able to skate the line between hard-hitting prison story and the adventure and excitement I love from Star Wars in a way that doesn't betray either genre. It's really quite masterful."-Big Shiny Robot "Lockdown is an exciting, engaging read. . . . It actually lines up beautifully for a sequel, which I, for one, would love to read."-Coffee with Kenobi "The novel makes The Clone Wars better. It also illuminates The Phantom Menace. I think it's the hallmark of the best tie-in fiction to resonate throughout other parts of the expanded universe in that way."-Knights' Archive "By the fiftieth page, I was hooked. . . . Lockdown is a wonderful 'antihero' novel, where it's just fine to root for the villain, because there are even worse things out there. This book was so fun and entertaining. I'll have to keep an eye out for more Star Wars books from Schreiber."-Seattle Geekly von Schreiber, Joe

Joe Schreiber is the author of several novels, including Star Wars: Red Harvest, Star Wars: Death Troopers, Chasing the Dead, and Au Revoir, Crazy European Chick. He was born in Michigan but spent his formative years in Alaska, Wyoming, and Northern California. He lives in central Pennsylvania with his wife and two children.