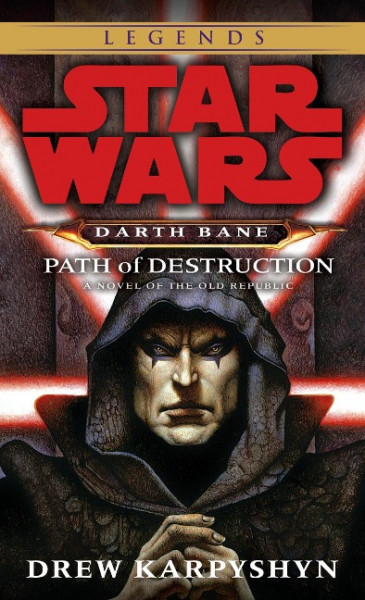 "Two there should be; no more, no less.One to embody the power, the other to crave it.”-Darth Bane, Dark Lord of the SithOn the run from vengeful Republic forces, Dessel, a cortosis miner, vanishes into the ranks of the Sith army and ships out to join the bloody war against the Republic and its Jedi champions. There, Dessel's brutality, cunning, and exceptional command of the Force swiftly win him renown as a warrior. But in the eyes of his watchful masters, a far greater destiny awaits him. As an acolyte in the Sith academy, studying the secrets and skills of the dark side, Dessel embraces his new identity: Bane. But the true test is yet to come. In order to gain acceptance into the Brotherhood of Darkness, he must defy the most sacred traditions and reject all he has been taught. It is a trial by fire in which he must surrender fully to the dark side-and forge from the ashes a new era of absolute power. "A solid space adventure [that] charts the evolution of an antihero almost as chilling as Darth Vader.”-Publishers Weekly von Karpyshyn, Drew

Drew Karpyshyn is the New York Times bestselling author of Children of Fire, The Scorched Earth, and Chaos Unleashed, as well as the Star Wars: The Old Republic novels Revan and Annihilation, and the Star Wars: Darth Bane trilogy: Path of Destruction, Rule of Two, and Dynasty of Evil. He also wrote the acclaimed Mass Effect series of novels and worked as a writer/designer on numerous award-winning videogames. After spending most of his life in Canada, he finally grew tired of the long, cold winters and headed south in search of a climate more conducive to year-round golf. Drew Karpyshyn now lives in Texas with his wife, Jennifer, and their pets.