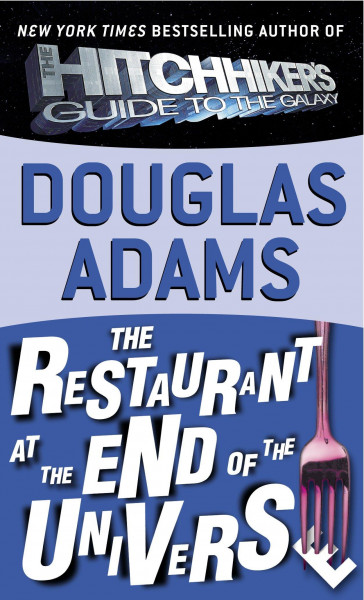 The Restaurant at the End of the Universe

The Restaurant at the End of the Universe

Now celebrating the 42nd anniversary of The Hitchhiker's Guide to the Galaxy, soon to be a Hulu original series! "Douglas Adams is a terrific satirist."-The Washington Post Book WorldFacing annihilation at the hands of the warlike Vogons? Time for a cup of tea! Join the cosmically displaced Arthur Dent and his uncommon comrades in arms in their desperate search for a place to eat, as they hurtle across space powered by pure improbability.Among Arthur's motley shipmates are Ford Prefect, a longtime friend and expert contributor to The Hitchhiker's Guide to the Galaxy; Zaphod Beeblebrox, the three-armed, two-headed ex-president of the galaxy; Tricia McMillan, a fellow Earth refugee who's gone native (her name is Trillian now); and Marvin, the moody android. Their destination? The ultimate hot spot for an evening of apocalyptic entertainment and fine dining, where the food speaks for itself (literally).Will they make it? The answer: hard to say. But bear in mind that The Hitchhiker's Guide deleted the term "Future Perfect" from its pages, since it was discovered not to be!"What's such fun is how amusing the galaxy looks through Adams's sardonically silly eyes."-Detroit Free Press von Adams, Douglas

Douglas Adams was born in 1952 and created all the various and contradictory manifestations of The Hitchhiker's Guide to the Galaxy: radio, novels, TV, computer games, stage adaptations, comic book, and bath towel. He was born in Cambridge and lived with his wife and daughter in Islington, London, before moving to Santa Barbara, California, where he died suddenly in 2001.